Lucky Lilies could have won despite playing second fiddle 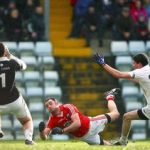 Kildare rode their luck against Cork

FOR two weeks running now Kildare have been lucky in the league.

They were blessed to escape with a win at home to Mayo in round one and they were flattered to lose by just one against Cork in Pairc Ui Rinn last Sunday. For the manager, it’s hardly surprising. He has a long list of absentees and he insists his is a side in transition.

“A lot of the senior players that you’d be hoping would be the spine of the team, the Peter Kellys and that, they’re not going to be around for a while yet so we’re a team that are trying to get as many points as we can as fast as we can in the league,” said Ryan after his side’s defeat to Cork, his first as Kildare manager.

Ryan’s winning run, which dates back to the start of January and the beginning of the O’Byrne Cup, was likely to end sooner rather than later once his side began their second successive Division 1 campaign. And yet, as much as Cork were full value for their victory, Ryan knows that Kildare could have collected another two points. Too often, Kildare didn’t fight hard enough for the kind of breaks you need to win in the pursuit of league points in February.

“Kickouts wise, percentage wise, it was 55-45, 50-50,” said Ryan of a midfield display that saw Kildare win 32 kickouts to Cork’s 33. “(Cork midfielder) Andrew O’Sullivan won’t have gone away as being down as having had a super game, nor will Rory Deane but their half-back line and their half-forward line picked up far too much breaking ball. That’s very, very disappointing.”

While it looked like Kildare were outplayed in the middle they actually did quite well in terms of primary possession. They won 56 per cent of their own kickouts, which was in line with the opening round display against Mayo, but they did really well on the Cork kickout in the second half, winning four of Ken O’Halloran’s seven restarts. Sean Hurley was doing quite well around the middle, winning four kickouts cleanly in the second half before being taken off after 56 minutes.

As you would expect in slippery conditions, both sides found it hard to hold on to the ball but Kildare made more errors in possession (32-28) and playing into the breeze in the second half, those extra turnovers were more costly for the Lilies. On a positive note, Kildare’s shooting in the first half was very good for the second week running. They scored eight out of 12 shots (67%) in the first 35 minutes, which was on a par with their opening half against Mayo (12/18). However they couldn’t maintain that in the second half and really struggled to judge the breeze – six efforts were short of the target after half-time.

Had Kildare the patience to probe for scores closer to goal they might well have been within striking distance by the time Cathal McNally scored their injury-time goal. As much as the team can have no complaints about the result, the frustrating part is the fact that they still could have won despite being second best.

NFL ROUND 2: THE KEY STATS