Nerveless Newbridge have the know-how 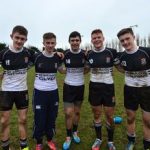 WHEN supporters spot Caroline Jenkinson on the Newbridge College sideline, they assume she’s the physio.

It doesn’t bother the Kilkenny native anymore although she’d be well within her rights to take umbrage. Not alone has she been coaching rugby at the Kildare school for the last ten years, she still plays with her club at home in the south east. Newbridge has no shortage of Irish senior stars among its alumni, but to have a former international on the coaching staff is a rare boast.

Jenkinson last played for her country in 2010 and she was in Italy last year to cheer on her former teammates as they created history by winning their first Six Nations Grand Slam. Her focus these days is on the Newbridge College Junior Cup side and a dominant display by her forwards laid the foundations for a comfortable first round victory against Castleknock last Thursday (6 February) at Templeville Road.

“The forwards needed to play big today,” said Jenkinson, who is the Juniors’ forwards coach. “First half we got our set piece, got our ruck ball and then the backs were able to do it. We’ve fire out in the backline so it’s just a case of getting them the ball. It was hard to maintain that concentration in the second half given they were up so much. We’ll address that.”

Newbridge enjoyed a dream start with a try after just six minutes and victory was secure before the end of the first half thanks to a 33-point lead. The Kildare teenagers were able to exploit the pace of their backline in the dry conditions on Thursday, their first round tie having been put back a day due to torrential rain earlier in the week. Nerves are always a factor in Cup games but, if anything, the unexpected delay eased the tension.

“With the match supposed to be on yesterday, they were actually nervous and it seemed like they were more relaxed today. I think maybe they didn’t sleep well the night before and it was the same for the coaches but we had no choice but to sleep last night because we were just so tired. I think the players were actually chomping at the bit today,” said Jenkinson.

That eagerness was evident in the opening half but Newbridge struggled to maintain their high-tempo game after the break. With the result beyond doubt, it was easy to switch off.

“You’d be forgiving them for the odd lapse in concentration but it would have been better if we’d kicked off the second half with a try early just to get the ball rolling again,” Jenkinson lamented but she had few complaints about the pack’s display,

“I couldn’t really ask more. We got our scrum, we got most of our lineouts. Rucks were messy in the second half but the score in the first half (33-0) shows how much ruck ball we got. There’s plenty more to work on. It wasn’t always perfect and the penalty count near the end is something that we have to look at it.”

Newbridge coughed up two late tries in the last 10 minutes after conceding a string of penalties inside their 22. After a comprehensive victory, it still leaves plenty of room for improvement, which is no bad position to be ahead of a Cup quarter-final against Terenure College on 25 February.

By Brendan Coffey
Sports Editor
@coffeybrendan
Email Journalist
Contact Newsdesk: 045 432147
"
We've fire out in the backline so it's just a case of getting them the ball""