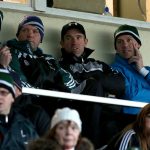 IT’S too early to draw conclusions yet just two rounds into the league, Kildare have played almost half the number of competitive games they played last season.

Before Jason Ryan took his Kildare team to Cork for the second round of the league, his record mirrored his predecessor’s at the same stage in 2013. Six straight wins to start the season and an O’Byrne Cup title in the bag. Not a bad way to begin the year but Ryan knows that all the positive energy created during January and early February can quickly dissipate.

Kieran McGeeney managed Kildare through 17 competitive games in 2013 and even though he won 11 of them, narrowly missing out on a place in the Division 1 league final along the way, he was in negative equity by the end of the Leinster championship.

For all the football that is played in January and February – January has been by far the busiest month the last two seasons – it carries little weight. It is a curious position for a manager in his first season.

“What we’ve been doing has been going according to plan,” Ryan says of the season to date. “We haven’t had to change the plan as to how we want to periodise the year due to results, which is great because it’s very easy if results aren’t going your way to lose focus on what your original plan was.”

Negotiating the heavy traffic at the start of the season is fraught with difficulty. McGeeney significantly lowered the age profile of the squad by blooding so many young players last year but managing such a youthful squad can’t be easy. Between under-21 and third level commitments, March is the first month Ryan will have exclusive access to all his players.

His task hasn’t been made any easier by the number of long-term injuries. Alan Smith, Eamonn Callaghan, Eoin Doyle, Niall Kelly and Peter Kelly are still absent while Brian Flanagan is resigned to a year without football. The uncertainty surrounding John Doyle’s future at the start of January couldn’t have come at a worse time – what with long-serving leaders like Ronan Sweeney and Dermot Earley in retirement. When you include Daniel Flynn – who’s currently playing Aussie Rules – you’ve got two-thirds of a very talented, and very experienced, Kildare side.

“There’s been massive change,” says Ryan. “It just means that other players have been asked to do things that they haven’t had to do before. You’re now asking people to be the chiefs that were the Indians. You’re asking guys to take greater ownership and show more leadership.”

No one epitomises the changing nature of the current side more than centre-forward Eoghan O’Flaherty. Having been handed the captaincy for the O’Byrne Cup and the early rounds of the league, the Carbury man has blossomed. He has 3-19 to his name from six games while his play-making at centre-forward has also been an asset.

O’Flaherty has always had the talent but the difference now is that he is very much a necessity in a side that is undergoing major surgery. 39 players were used during the successful O’Byrne Cup campaign while 24 players have featured in the opening two rounds of the league. Only five of those 24 have played 140 minutes – Mick O’Grady, Mick Foley, Kevin Murnaghan, Paddy Brophy and Tomas O’Connor – while Shane Connolly and Mark Donnellan are job-sharing between the posts. Connolly is due to get the nod against Tyrone on Sunday but their battle for the number one jersey is symptomatic of the competitive culture Ryan is trying to cultivate.

“We’re putting out what we feel is the best team each week,” the manager says. “That competition within the squad, we’re working very hard to develop it. The way the panel is at the moment, fellas are fighting to get a game and fighting to stay in the panel.”

Only last week three more players were cut from the squad. Seamus Hanafin, Conor Mellett and Conor Canning were always on the fringe but their departures will keep everyone else on their toes. After losing to Cork in the last round, Kildare have worked hard on the physical side of the things in the two weeks since. When they welcome Tyrone to St Conleth’s Park on Sunday, it will be the first of a daunting three-game stretch that includes a visit to Croke Park the following Saturday to face Dublin. Kerry visit Newbridge on 16 March, in what is likely to be a must-win game for Kildare.

“It’s about being competitive all the time, regardless of who we’re playing,” says Ryan. “Tyrone, Kerry and Dublin – we’re playing against three teams who have all won All-Irelands since 2008. You’re looking at the gold standard. If we were to win the Tyrone game, it would mean that we’re maybe one game away from survival.”

While Ryan is not losing sight of the bigger picture, his immediate concern is to make the most of a home league game this Sunday. Kildare left Cork disappointed to lose at all, let alone by just one point, but they have demons to exorcise against Tyrone, having lost to Mickey Harte’s side three times in 2013.

“There were periods in the games last year (against Tyrone) where we lost focus and allowed them in for key goals,” says Ryan, who will be guarding against similar concessions on Sunday. “If we had beat Cork by one point, then we would have been in the same situation as Tyrone, having won the provincial, pre-season cup competition and having won the first two games of the National League,” he adds, but a victory this weekend would rectify that and put Ryan’s Kildare within reach of another league semi-final.

By Brendan Coffey
Sports Editor
@coffeybrendan
Email Journalist
Contact Newsdesk: 045 432147
"
You're now asking people to be the chiefs that were the Indians"