KILDARE WITHOUT BRUISED BOLTON FOR TYRONE 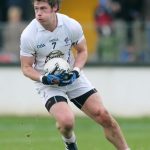 KILDARE defender Emmet Bolton will miss this Sunday’s National League game against Tyrone because of a knee injury.

Bolton was substituted at half-time during the defeat to Cork on 9 February after damaging his knee in a tackle. A bruise around his bone has not healed in time for this weekend’s round three league clash although the experienced Eadestown man should be back in contention for the game at Croke Park against Dublin on Saturday week (8 March).

Manager Jason Ryan will also be without defender Ollie Lyons for the Tyrone game although he remains hopeful that the Celbridge man’s hamstring problems will be resolved in time for the Dublin game. John Doyle’s return to the panel has come too late to make the team for Sunday but Ryan expects to have the Allenwood man available within the next three weeks.

“He’s training separately. He’s working very, very hard. It’s going to be another couple of weeks before he’ll back in earnest. He’ll be available at some stage in the three games but not for the Tyrone game,” said Ryan, who faces his toughest stint of the season so far with three games in three weeks against Tyrone, Dublin and Kerry.

“As each game goes by now it adds its own layer of pressure – pressure to reach the semi-final or pressure to avoid relegation. Each result is going to have an impact on how the season goes,” said Ryan, who is still without a host of regulars, although last year’s captain, Eamonn Callaghan is nearing a return, as is Alan Smith.

“Eamonn and Alan have joined in a certain amount of the warm-ups and they’re training really hard but they’re not ready for a game yet. But they’re making really good progress. Keith Cribbin is back in full action,” said Ryan.

Since losing to Cork, Ryan’s men have put in a lot of hard yards as the three-week gap between rounds two and three of the league gave them the chance to work on their fitness,

“This was our last opportunity to progress physically because from here on in until the end of the league it’s about developing tactics, extra match sharpness, rehearsing different set plays and that’s it,” said Ryan and one of the issues on his agenda is Kildare’s long-range free-taking.

“We haven’t had somebody who’s been consistently putting 45s dead. It hasn’t impacted us too much this season thus far but in key games last year it did. It’s on our hit list.”

To that end, goalkeepers Shane Connolly and Mark Donnellan have been busy practicing their dead-ball shooting in training although both men are also fighting for the same jersey. So far in the league, Ryan has opted to rotate his ‘keepers but that policy is set to end sooner rather than later as the manager wants to settle on a first-choice number one.

Just last week the panel was trimmed again when fringe players Conor Mellett, Conor Canning and Seamus Hanafin were cut while Sarsfields’ promising wing-back Conor Tiernan has had to leave the panel. The Newbridge man works with the Defence Forces and will be based overseas later this year.

“It’s a pity because he made a great impact in the games he played in the O’Byrne Cup and he was making a big impact in training sessions. With the new rules, a lot of players don’t want someone like Conor running at them,” Ryan lamented.

Sunday’s game against Tyrone is a chance for Kildare to gain revenge for three defeats to the Red Hand men in 2013 – two of which were inflicted at St Conleth’s Park. So far in 2014, Mickey Harte’s side have won every game, so it will be a tall order for a Kildare side very much in transition.