Higgins to lead Lilies against Faithful 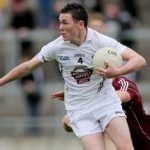 Sean Higgins will captain the Kildare under-21s as they begin the defence of their Leinster title against Offaly tonight (5 March) in Athy.

The Maynooth defender, who played at corner-back on last year’s Leinster-winning side, will lead the side from full-back in a team that features six of last year’s side that started against Meath in the first round. Clane’s Barry Egan continues at corner-back, Athy’s David Hyland moves to centre-back, Celbridge’s Fergal Conway is in midfield, Paddy Brophy is at half-forward and Clogherinkoe’s Daniel Grehan is named at full-forward having played at midfield in 2013.

The team is backboned by Celbridge – who have five players in the side – while Athy and Maynooth each have two players in the team. There has been no late call-up for Johnstownbridge star Daniel Flynn, who rejoined the panel at the weekend having flown home from Australia.

Flynn left home to take up a two-year rookie contract with Port Adelaide last November, returned to Ireland last week and trained with the Kildare under-21s  on Sunday (2 March) ahead of their first round Leinster championship game against Offaly.  Flynn spoke with Kildare senior manager Jason Ryan on Saturday (1 March).

“He’s in great form, he misses Gaelic football and he’s looking forward to getting back playing Gaelic football,” said Ryan after Sunday’s Allianz Football League defeat to Tyrone.
In a statement, Port Adelaide revealed that Flynn had taken a leave of absence from the club. “While Daniel has fitted in well and has made good progress with his football he has also struggled with homesickness,” said Peter Rodhe, General Manager of Football. “The club will continue to work with Daniel to help him make the transition to playing football so far from home.”
Flynn had played one game for Port Adelaide in the NAB Challenge on 16 February but his immediate future is now with Kildare. It is a welcome boost for Tom Cribbin’s under-21 side, who begin the defence of their Leinster title against Offaly in Geraldine Park at 7.30pm. Athy’s Niall Kelly won’t be available for the game as he continues his recovery from a hip injury, which required surgery last December.
Kelly is still short of match fitness despite returning to training. He hasn’t played a competitive game since last July against Tyrone in the All-Ireland qualifiers.
“Niall got the all clear but it’s probably going to be another two weeks before he gets into real heavy contact so he probably won’t feature on Wednesday night. We’d be hoping that if we get over Offaly he’d probably be coming in good for the next game,” said team selector Sos Dowling.
Senior stars Paddy Brophy, David Hyland and Fergal Conway will be key players on the side as they look to retain their Leinster title. Offaly are in the quarter-finals having beaten Wexford by 1-16 to 0-6 in the opening round.