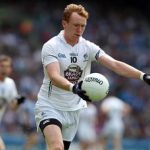 Kildare manager Jason Ryan insists that the squad for last Sunday’s defeat against Derry was picked with footballing reasons in mind.

Paul Cribbin, Daniel Flynn, Sean Hurley, Fergal Conway and David Whyte were left out of the matchday squad and featured for their clubs over the weekend amid rumours of a disciplinary breach the previous Friday (28 March). Cribbin, Hurley and Conway had featured in all five of Kildare’s league games up until Sunday’s round six encounter with Derry – Cribbin and Hurley had started every game – but none of those three were even on the bus to Derry for last weekend’s encounter.

Ryan insisted that their omission was not a form of punishment but a reflection of the competition among the squad.

“We’ll train on Tuesday and Thursday this week and that will dictate who will get into the panel for this weekend (against Westmeath). Anybody who wasn’t in the panel last week, there are places up for grabs this week. We did leave players behind and they were asked to go play with their clubs and they did that,” he said.

While that quintet were left kicking their heels at home, Ryan was at least able to introduce Johnny Doyle, Eamonn Callaghan, Niall Kelly and Peter Kelly for the first time in this league campaign against Derry.

“It was brilliant to get them on the field and considering how little some of them have done, it was great. It was too soon to start them last Sunday and it may even be too soon to start them this Sunday, one of the things we want to ensure is that when we bring a player back only when he is ready,” he said.

Ryan is disappointed that the Derry defeat confirmed that his first league campaign would end in relegation but he remains confident that Kildare will be in good shape by the time of championship.

“Obviously in the group is disappointed to have lost four games in a row. It only seems a short time ago that we had put in three very competitive performances in Division 1 but the last month hasn’t gone according to plan for us. The Dublin, Kerry and Derry games…the gap in scores at the end of the games has been disappointing and while we have been happy with certain aspects at certain times in those games, there was too many things that didn’t go to plan and didn’t work out for us,” he said.

“It’s disappointing but so much of your year is based around the championship. Last year midway through the season we felt things were going really, really well. We got to the league semi final and as management team and the players, we were happy with how we were progressing. In the Championship we didn’t progress and then when we were beaten by the All-Ireland winners (Dublin) and another reached the semi final (Tyrone), it was perceived as being a bad year. How you rate the success of the year is very based around the championship and we are still optimistic. We’ve worked with a lot of the players, we’ve learned a lot about them and that will pay off for us when it comes to the Championship.”