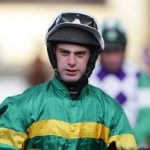 A back garden becomes a racecourse, a child’s imaginative eye seeing the fearsome Chair where branches and poles stand. Ponies transformed into the courageous steeds hurtling around Aintree and children the brave jockeys chasing Grand National glory or tumbling, spinning to the ground at Becher’s Brook.

It’s a game that will be recreated in fields and paddocks around the country this weekend as the magic of the Grand National fires childhood dreams. Only a select few will ever get the opportunity to turn the games of their youth into the reality of their adult lives but Kildare jockey Niall ‘Slippers’ Madden is one of the lucky ones.

In 2006, on his first ride over the Grand National fences, those halcyon days of ponies and play were brought to life in spectacular fashion as Numbersixvalverde turned into Aintree’s famous elbow and galloped to racing immortality. Eight years on the memory is as vividly alive as if he were riding the race now.

“It is one of those races that I will never forget. If I ever come home from racing and I’m in bad form, I’ll often put on the DVD of the race and watch it and it puts me in good form again. I remember every fence and what was going through my head. It is the biggest jump race that I could ever ride in, never mind winning it,” he says of the spell Aintree casts.

At just 20-years-old, Madden was only starting his career as a professional jockey when Martin Brassil asked him to ride Numbersixvalverde, the previous year’s winner of the Irish National. He had won the 2005 Thyestes Chase on the gelding, named after his owner’s Portuguese bolt hole, and Brassil put him back up for his Aintree warm-up.

“I was delighted to get the ride and I thought he had a fighting chance, winning those handicap chases and he jumped really well. He wanted softish ground to get the best of him and when we landed over there on the Friday evening it was lashing rain so we were delighted to see that. Obviously you are going out to try and get around and enjoy yourself but at the same time it was great to have a horse with a fighting chance. I think he was second or third favourite on the day so I was delighted to get a good ride like him. I grew up dreaming of winning the National and thank God it came true back then. They say that the Melbourne Cup is the race that stops a nation but the Grand National is kind of our one. People who aren’t even involved in racing sit down and watch the Grand National.”

Aintree doesn’t bestow its glory easily and many great champions have spent an entire career in the saddle without ever winning a National. When Madden won, AP McCoy was still on his epic quest for a victory over the iconic fences. The perennial champion was one of the first to congratulate the young Kildare man in the weighroom but the sage advice from a harden competitor remained with Madden always, which was why he was thrilled when McCoy finally found the grail in 2010.

“I was talking to Tony and he told me how delighted he was for me but that I wouldn’t realise what I had done until a couple of years had passed. It was my first time riding in the National and I had won it and I was very, very lucky to have done that but he wasn’t knocking it or anything but he was just telling me that I wouldn’t realise just what I had done until I had ridden in it a few times and discovered how hard it is to win the race. Even five or six weeks later after winning it, it was still hitting me. I’d say it is bit like anyone winning an All-Ireland when they have never got there before, a young lad winning it for the first time. I was delighted that Tony McCoy actually won it because it was the race that was missing from his CV. He won every other big race and it would have been sad to see a champion jockey like him, who we will probably never see the likes of again, not winning it,” Madden says of McCoy’s emotional triumph on Don’t Push It.

Having been blessed to ride a National winner, the 28-year-old is one of the few people qualified to know just what type of horse it takes. Finding the ideal horse is almost as tricky as locating the Higgs Boson but Madden has definite ideas on the qualities necessary.

“You need a horse that will relax very easily into a race, is very good to jump and clever at the fences. You need a knowledgeable horse so not really a very young horse, you’re looking for an older horse that stays well. You need an all-rounder who can travel and has a bit of speed but still has the stamina to keep going.

“It is probably not the race that it was. The fences have been altered a lot, they are not as stiff as they were. It still takes a bit of getting and, don’t get me wrong, it is still hard to win a Grand National but it might not be as hard as it was before with all the alterations to the jumps but it still takes a fair horse to win it and you need an awful lot of luck on your side,” he adds.

Madden believes that Brassil has a chance of adding a second National with Double Seven and if former Gold Cup winner Long Run takes to the race and enjoys some luck, then he is the horse with more class than the rest of the field. As for himself, he returned to the saddle on Saturday after a long spell on the sidelines with a broken knee and ligament damage but he won’t be at Aintree on Saturday after breaking his leg at Clonmel last Thursday. For all his recent woes, the desire to live the thrill of the National remains as strong as when he galloped around the back garden on his pony, years before Numbersixvalverde brought his childhood dreams to life.