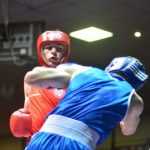 Gary Cully of St David’s Boxing Club in Naas is in Bulgaria this week hoping to strike gold at the AIBA World Youth Championships.

“I’m buzzing for it now, I can’t wait to get out there and get back in the ring again,” said Cully, who won gold at the European Youths in Holland last year.

The 18-year-old and the rest of the Irish squad, including John Joyce and Willie Donoghue representing St Michael’s of Athy, arrived in Sofia on Wednesday (9 April) but the action doesn’t get underway until Monday (14 April).

“You’d be a bit restless in the days before the fights, you just want to get in and start boxing but I’m used to it now so it will be alright,” said Cully about the days leading up to the first fight. He’ll use that time off to acclimatise himself with the venue.

“I’ll have a look at the changing rooms so then when I go to box I’ve been there before. On the day of the fight things won’t seem as bad because I’ll already have seen what it’s like,” he said.

A tall and rangy boxer, Cully drew plaudits from Olympic medallist Kenneth Egan when winning an Irish youth title in January and another Olympic medallist, Katie Taylor, has been helping Cully in his preparations for the Worlds.

“The last two weeks we’ve been training with the seniors so I’ve been sparring with Katie Taylor and David Oliver Joyce and people like. We’ve been getting some good sparring and training in. That was a step up from sparring youths, there is a lot more physical strength there and they are more experienced but that can only bring you on,” he said.

Cully has great confidence in his ability and doesn’t mind being singled out by other boxers from around the world as European champion.

“I’m the champion of Europe at youth level going out here so everybody knows me out there. There are the Cubans and the Mexicans but I’m not worried about the likes of the Russians and places like that because I have beaten them all before. They will all want me in the draw and to beat the European champion but that doesn’t bother me at all. I’ll be ready for whoever I’m drawn against,” he said.

“Win the Europeans and go on to the Worlds and then hopefully qualify for the Youth Olympics, that would be the next step,” said Cully, who sees this week as a stepping stone.

Come fight time, Cully will be an ocean of calm amid a whirlwind of noise as he prepares for his first bout.

“A lot of the lads on the team would be nervous before a fight and can’t sit. I like to chill out until two or three fights beforehand and then get focused,” said Cully. His preparation for the fight will be helped by the knowledge that his number one fan, dad Mick, will be in the crowd to cheer him on.

“He’s there all the time, if he wasn’t there I’d probably get a bit worried.”

Other than his father not being in the crowd, there is very little that the confident youngster is likely to be worried about.

Elsewhere, Allan Phelan recorded his fifth consecutive pro win against Jesus Gonzales in New York over the weekend. Phelan had his opponent on the canvas in the fourth round before securing a unanimous decision after the fight went the full six rounds. It was Phelan’s first six rounder and the 22-year-old seems to be progressing very nicely.

In Australia, Dennis Hogan has confirmed the next defence of his Australian middleweight title. The Kilcullen man remains undefeated after 18 fights and the fourth defence of the title he won last November will be against Kurt Barham on 21 May in Brisbane in a fight that will be shown live down under on Fox Sports.