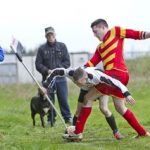 NAAS Utd continued their fine start to the KDFL season with a narrow 1-0 win over local rivals Ballycane Celtic.

A first half Vinny O’Connor goal was all that was needed to settle the game and it means that Naas now lead the way have taken 10 points from their opening four games. They are certainly laying down the gauntlet to reigning champions Castle Villa who were held to their third draw in four games away to Woodstock Celts.

In the end, Villa may feel relieved to get out of Woodstock with a scoreless draw because the home team were the better side for large periods of the game, even after they went down to ten men following the dismissal of Ryan Leonard in the 65th minute. However, it was Villa who were closest to breaking the deadlock in the game but Andrew Leonard spectacularly headed Roy Byrne’s shot off the goal line after the winger had beaten goalkeeper Mick Lawless with a powerful shot.

Elsewhere in the Senior Division, Keith Kinsella scored four goals as Kildare Town staged a stunning comeback against Sunday’s Well. The Naas side took a 3-2 lead early in the second half but Kildare eventually ran out 7-3 winners in a remarkable game. There were also wins for Rathangan and Clane Utd against Eleson Utd and Newbridge respectively.

In the Premier Division, goals from Stephen Riordan (two), Paul Clifford and Dean Heavey gave Caragh Celtic a 4-0 win over Bridge Utd as they continued their 100 per cent start to the new season.

Coill Dubh moved to second in the table behind Caragh with a 2-1 win over Sallins Celtic. Wayne Bowers converted a penalty he had won himself to give Coill Dubh the lead but Sallins quickly equalised. Bowers eventually settled the game with his second of the game when he held off the challenge of two defenders to poke home the winner with 20 minutes to go.

Meanwhile, Danny Dee scored a hat-trick for the second game in a row as Monasterevan recorded a fine 4-2 win away win over Kilcock Celtic. Dee scored twice as Monasterevan raced into a 3-0 lead by half-time, Andrew O’Gorman scoring the other, and Dee completed his hat-trick on the hour mark from the penalty spot to repeat the feat he managed against Suncroft the week previously. Newtown Rovers and Kingstown played out a goalless draw while also in the Premier Division, the game between Clonmullion and Kilcullen had to be abandoned after 17 minutes when referee Sid Comerford had to pull out of the game because of a hamstring injury.

In Division 1, Liffey Celtic joined Newbridge Town on top of the table with a 2-1 win away to Newbridge Colts. Redwood are also closing in on the top teams thanks to 3-0 win against Straffan. Jamie Rogers scored twice as Naas Utd moved into a 2-0 lead against Kinnegad Juniors but they couldn’t see the game out and it finished in a 2-2 draw. Maynooth and Galhoy were also winners in this division.

In Division 2, Walshestown lead the way following a convincing 8-1 win over Castle Villa while Naas Utd picked up their first win of the season with a 2-0 triumph over Kilcullen. Kildare Town and Athy Town played out a 1-1 draw.

It’s four from four for Naas Utd in Division 3 after two goals from John Quinn inside the opening 20 minutes gave them a 2-0 win over Johnstown Utd.