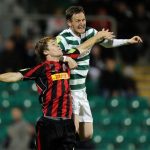 Kevin Feely, left, who played with the Kildare senior footballers in a recent challenge, has decided against a return to Gaelic football and will instead search for another professional soccer contract cross channel next season

KEVIN Feely made his international soccer debut with Noel King’s Republic of Ireland under-21 team last weekend and he will now look to continue his professional soccer career – but he was mightily close to throwing his lot in with the Kildare senior footballers.
Feely was among the substitutes as Athy beat Maynooth in the first round of the Kildare senior championship at the start of May and he also trained with the Kildare seniors, even appearing as a sub in a challenge game against Tipperary. However, he is now more determined than ever to make it as a professional in England.
“When I came back initially I didn’t know what I was going to do and at the time I was still unsure if I was going to go back to England or going to stay at home and go to college and pursue a career in Gaelic. Now, I’m more focused on going back over and having a good season with whatever club I go to, that’s the main priority now,” said Feely, who played the last 10 games of the season with League Two side Newport County while on loan from Charlton Athletic. Charlton are not renewing Feely’s contract, which forced the Athy man was to consider turning his back on soccer.
“Charlton made me aware of being released back in April so when I was with Newport I had that time to prepare for next season. I have two or three options to go back into the league and I think no matter what I’ll be playing league football next season so I am delighted with that,” he said.
Although he is not sure where he will be playing next season, Feely wants to go to a team where he will get regular football.
“It’s probably better for my career to go wherever I am going to be playing regularly. I’ll be 22 in August and at this point most teams are looking for people who have experience. I’ll be looking to go to the club where I think I’m going to get the most games and that’s most likely going to be a League Two or a lower end League One team,” he said.
While still mulling over things in his mind, he even turned out for Athy’s second team and yet just a few weeks later was making his Irish under-21 debut.
“Not many lads can say they have done that,” he laughed. “I was mad for a game of football at that stage, it had been over year since I played and I just wanted to get the feel for it again and see how if i enjoyed it again. I definitely did enjoy it but I’ve made my decision now that I am definitely going back over to England.”