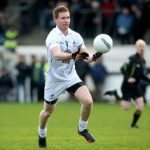 FOR someone who was a mainstay in the team during the league, as he has been over the past few years, it was something of a shock to see Eoghan O’Flaherty relegated to the bench for last Sunday’s Leinster SFC win over Louth.

O’Flaherty – who made a second half appearance and scored a point during the 15-point win over the Wee County – doesn’t hold any grudges and is intent of forcing his way back into Jason Ryan’s first 15 before Kildare return to action in three weeks’ time.

“Coming up to the club championship I probably missed a few training sessions and I knew then that I would have been under pressure with the other boys flying and in pole position for the jersey,” said the Carbury man, who captained Kildare to O’Byrne Cup glory in February.

“I tried my best to put pressure on Jason to include me in the team today during training over the past few weeks but I’ve another three weeks to put even more pressure on him to include me from the start the next day.”

O’Flaherty acknowledges that he is under pressure to dislodge any of Cathal McNally, Eamon Callaghan or Padraig O’Neill who occupied the three half-forward berths against Louth.

“The lads started really well and built up a fair lead; then it’s up to the subs to come on, make an impact and push things on another level or two and not allow the standard to slip. Dublin are a prime example of this over the past few years and it wouldn’t be far from the truth to say that their subs have regularly been the game-changers for them on occasion.

“Smithy (Alan Smith) came on and got two points straight away, I got one when I came on and David Hyland, Daryl (Flynn) and Fitzy (Ciaran Fitzpatrick) all did what was expected of them too.”

Dismissing any fall-out from a poor league campaign that culminated in relegation, O’Flaherty conceded that the long-term goal was always the championship.

“First day out and you are always nervous, especially off the back of a league that we had. Yyou always just want to get off to a good start and to be fair it was an impressive enough performance with some good scoring.

“I think there was a lot more doom and gloom outside of the camp than we actually felt ourselves. We blooded a lot of new players during the league in Division 1, we had three or four very experienced players who were only coming back to full fitness near the end of the league so we were short too.

“That’s not to take away from those who played. They were all there on merit but as a unit, with such a large change in personnel, we had a lot of gelling to do as players and as a team during the league and at that level that can be very difficult. As a group we always remained positive even though we got relegated. We knew we had a strong squad, a stronger squad when everyone was back fit and you saw that today with the depth we had in the panel with some of the guys coming in off the bench and then others who didn’t make an appearance.

“There are a lot of us who weren’t happy with how the league went but personally speaking I knew that we were building towards the championship. Maybe for some of the younger lads it wasn’t as easy, especially when suffering a couple of defeats back to back.

“But Jason (Ryan) and the rest of his management team were very good in keeping everyone positive as we built for today. We had a good number of weeks of training after the league and we were all quite happy with how things were going.”

By Brendan Coffey
Sports Editor
@coffeybrendan
Email Journalist
Contact Newsdesk: 045 432147
"
I’ve another three weeks to put even more pressure on him to include me from the start the next day."