CONWAY AT THE HEART OF KILDARE RECOVERY 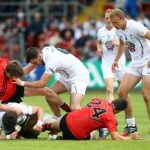 IN what was only his ninth senior appearance for Kildare, and his third in the championship, centre-back Fergal Conway turned in his most complete 70 minutes.

“I kept the head down and just tried to do things right,” said the Celbridge man after Sunday’s 10-point win away to Down in the All-Ireland SFC Qualifiers. “I probably let myself down against Meath as well, but it was grand (today), there’s tougher opposition ahead and plenty to work on personally.”

Having recovered from the Leinster semi-final defeat to Meath, Conway and his teammates had to rediscover their self-belief.

“We had to believe in ourselves, nobody really gave us a chance coming all the way up to Newry. We knew it was going to be a tough test and that’s exactly what we got. Straight after half-time they came at us with everything but we stuck together and got a few scores. Then Tommy (Moolick) got the final goal that took the pressure off a little bit. They are a very fit team though and kept going to the end.”

Defensively, Kildare were vastly improved from the previous game against Meath and they restricted Down to just a single point from play in the opening half while the home side had just 20 shots at the Kildare goal in the game.

“We felt we let ourselves down in that aspect against Meath. We had to improve, we knew if we did that they’d (Down) punish us,” said Conway. “We just had to be focused and aggressive. We always try to do that though, we didn’t really do anything different. It was just a do or die game and it brought out the best in us.”

There was a rocky period for Kildare at the start of the second half but Kildare were able to play their way through it.

“We knew they were going to come at us with everything and that’s what they did. It was backs to the wall there for about 10 minutes but we recovered well and picked a few vital scores. They got five on the trot so we reacted well in that respect.”

And the win was rounded off by a superb goal from Tommy Moolick.

“It was a great finish by Tommy, he’s capable of that. Everybody was putting the shoulder to the wheel though and worked hard and thank God we got the win,” said Conway, who is already focused on this weekend’s game against Clare in the next round.

“We have plenty to work on though,” he said. “We made a good few mistakes too. There’s always negatives that come with the win so we have to work on that as well.”