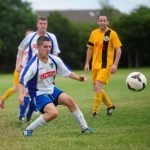 WITH the last 16 round of the Lumsden Cup taking pride of place in the KDFL action this weekend, Premier Division side Kilcullen caused the shock of the round as a Brian Kelly hat-trick helped them to a 4-1 win over Senior Division Kildare Town.

Keith Powell’s team, who needed a penalty shoot-out to get past Maynooth Town of Division 1 in the last round, were full value for the win over a team who are very much still in the running for the runners up spot in the top division.

Howard Peacocke gave Kilcullen the lead after just four minutes and from that moment on it was a game for Kildare Town to forget. They missed two penalties during the game and Kilcullen sealed the win when Kelly completed his hat trick with almost the last kick of the game.

Senior Division league leaders Naas Utd remain the favourites to win out the competition after a comfortable 3-1 win over Walshestown. Naas had to come from behind but in the end, Division 2 side Walshestown couldn’t live with the quality in the Naas side and they safely booked their place in the last eight.

Their town rivals Ballycane Celtic were made to work hard for their place in the quarter finals by Kilcock Celtic. Twice, Ballycane took the lead in the first half only to be pegged back on each occasion. There were chances at either end with the game tied at 2-2 but eventually Ballycane secured the win thanks to goals from Eamon Laabai and Keelan Noone.

Sunday’s Well are another Naas side into the quarter finals following a 2-1 win over Newbridge Colts while last year’s runners up Liffey Celtic are also through thanks to a hard fought 3-2 win in Athy against Bridge Utd.

On Saturday evening, struggling Eleson Utd will also have raised some eyebrows with an excellent 4-3 victory over Clane Utd.

Elsewhere, there was also a couple of games in an earlier round and wins for Woodstock Celts and Newtown Rovers set up games against Redwood and Caragh Celtic respectively.

In the league shield, Coill Dubh, Bridgewood Celtic, Maynooth Town and Monread all recorded wins on Saturday and there were also wins for Rathangan, Castle Villa, Suncroft and Straffan on Sunday.