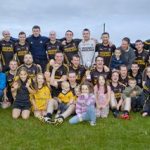 David Bergin finally settled this tight and tense Division 5 final in favour of Clogherinkoe with a goal two minutes from the end of extra-time.

It proved to be the last score of the game and left the biggest gap between the teams on the night. Indeed, there was only one other occasion over the course of the 80 minutes that there was more than a one point gap between two evenly matched teams.

The game was played in Rathangan on the sort of evening that served as a reminder that Autumn isn’t too far around the corner. Chilly and with heavy intermittent showers, it wasn’t the ideal evening to be watching football but the action on the pitch kept those on the sidelines enthralled.

It was 1996 when veteran Fergus Aspell played every game that year for Kildare and he pulled the strings for Kilcullen throughout the game, he also kicked the equalising score late in normal time but he just couldn’t manage to inspire his team to victory in extra time.

The opening ten minutes gave an indication of how tight the game was going to be after Kilcullen scored the opening two points of the matche before Clogherinkoe came back with three in row.

Clogherinkoe suffered the blow of losing Gordon Miggin to injury early on but his replacement Neil Bergin was heavily involved as Clogherinkoe came back into the game. After an eight minute scoreless spell Clogherinkoe when two points clear through a David Bergin free.

Kilcullen got back into the game when David Reilly hauled Graham Lavin to the ground inside the square as the Kilcullen full forward headed towards goal. Reilly received a black card for his trouble and Ben Foran doubled the punishment by slotting the penalty into the net.

Pat Farrell and Keith Wilkinson followed that by kicking a couple of excellent points to put Clogherinkoe back in front but a Lavin free in injury time ensured the teams were tied at 1-3 to 0-6 at the break.

There were three points for both teams inside the first 15 minutes of the second as the teams went score for score.

The final ten minutes were very tense but it was Clogherinkoe who got their noses in front when captain Will Coyne kicked a tremendous score under pressure from Foran with nine minutes to go.

Kilcullen pushed hard in the remaining minutes and almost got a winning goal when skilful half forward Martin Murphy shot narrowly wide after a dynamic run.

It looked like their efforts would be in vain as the clock ticked into extra time but in the last attack of the game, The Rags remained composed on the ball and eventually worked it to the man in space and although not the most natural of scorers, Aspell made no mistake from distance.

There were no scores at all in the opening half of extra time but the game sprung to life once again in the second half. Twice Kilcullen got themselves ahead, with points from Lavin and then Foran, but they were pegged back each time by Wilkinson and Rory Phelan.

That tied up the scores once more going into the final two minutes and it looked like Kilcullen might get a winner as they came forward but once Clogherinkoe turned the ball over, they worked a three on two situation and it was left to Bergin to net after Wilkinson and Neil Bergin were involved in the build up.

There was no time for Kilcullen to find a late equaliser and it was left to Will Coyne to lift the trophy after the final whistle.