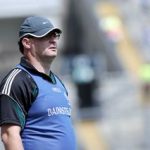 FORMER Kildare star Bryan Murphy is the new county under-21 manager – but only just.

Murphy, who is best remembered for the goal he scored to win Kildare’s first Leinster title for 32 years in 1998, managed the county minors to a Leinster title in 2013 but when he was put forward as the new under-21 boss at last Tuesday’s (5 August) county board meeting, the proposal was met with a cool response from club delegates.

Their reluctance to endorse Murphy stemmed from the fact that delegates were not given advanced notice of the proposal and did not have time to consider it before the August meeting of the county board. Murphy’s proposed appointment was not on the agenda for the monthly meeting and the proposal was only put forward by county chairman John McMahon at the end of the meeting and introduced under any other business, which is usually reserved for more trivial matters.

Club delegates raised objections to the proposal not because of the person being nominated but rather the manner in which the matter was foisted upon them. Some delegates also felt they should have more of a say in who is nominated for such an important position.

After county chairman John McMahon put Murphy’s name forward for approval, there was a counter-proposal from the delegates that clubs would discuss the matter and come back with their views at September’s meeting.

However McMahon did not want to wait another month to make the appointment although it was only when vice-chairman Ger Donnelly intervened that the delegates came around to the county board’s way of thinking.

“Have a think now before you decide what you want to do,” Donnelly warned the club delegates. “The management of Kildare GAA, given the task of running the county on your behalf, have come with a proposal to the meeting. The chairman has told you who it is and the management has already backed it.”

After Donnelly’s words, delegates seemed to accept that the management committee were elected to work on matters such as this and the counter proposal from the floor was withdrawn. Murphy was then successfully ratified but it was agreed by all in future it would better if delegates were given prior notice of such significant proposals prior to county board meetings.