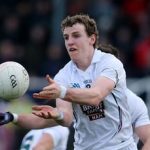 KILDARE have lost another senior footballer to the AFL.

Towering midfielder Sean Hurley will take up a contract with Fremantle near the end of the year while forward Paddy Brophy is reported to have agreed a deal to play Australian Rules in 2015 as well.

“He (Brophy) has trials with a number of teams and is then taking part in the NFL Combine. It’s out of our hands at the moment. We’d love to see Paddy play in the Lilywhite jersey for many years to come but there is not a lot we can do,” said Kildare manager Jason Ryan, who will have to plan without Hurley next season.

“Sean has a contract with Fremantle so he is due to go in a few weeks time,” said Ryan, who will be without at least three potential senior stars next year.

“I suppose it’s a shame for Kildare GAA to have guys that you know are extremely talented who you know would be able to help. The thought of them not being around is disappointing. You have Daniel Flynn, Kevin Feely, Sean Hurley and maybe Paddy Brophy as well. To lose four guys from around the same age bracket would be hard to take,” said Ryan, who is also looking for a new strength and conditioning coach after Barry Solan joined the new management ticket in Mayo alongside Pat Holmes and Noel Connelly.

“We had a lot of plans in place and Barry was all set to work with us but when Barry and I first spoke about the Kildare job, one big part of the job was that I wanted it to be over a number of seasons. I didn’t want him coming in for one season and then leaving. But he specified two reasons why he might not be around, one was that if he was working in the Premiership and the second was that if he got a phone call from Mayo.

“Andy Moran, the Mayo captain is his best mate, and he’d have close ties with the whole group. One comment he said to me was: ‘It would make my father very proud to see me involved with my home county.’ It was something that came out of the blue. He had been working with Eoin Doyle and Eamonn Callaghan on the Friday morning and met with Mayo for the first time later that day and from there things moved very quickly.

“We’re doing a little bit of work now to see who will take his position. At the start of the 2014 season we had no team in place in any shape or form but now we have a team in place, programmes in place, it’s just a matter now of somebody coming in to head it up.”