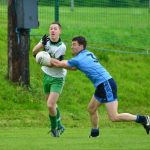 Willie Casey (right) in action for Eadestown in round one of this year’s intermediate football championship
Photo: Adrian Melia

Football has come full circle for Willie Casey. In 1996 he won a county medal on the subs bench with Eadestown but even after back-to-back final defeats in 2001 and 2002, it doesn’t count. Sunday’s intermediate final against Round Towers is all that matters now for the 37-year-old.

“I broke my leg in late ’95. I was only coming back on to the squad in ’96 so I don’t really count it, even though I was back fit. I knew myself there was no chance of me coming on,” says Casey, who was a teenager at the time.

He had just come through his first year of college at Dublin City University (DCU) but his efforts to keep fit during the off-season backfired. Playing an internal soccer league with the first years against the fourth years at DCU, Casey’s enthusiasm proved his downfall.

“I was a GAA-head playing soccer,” he says trying to convey the image of a no-nonsense defender getting to grips with the nuances of a slightly more elegant game. “I went to clear a ball and the fourth year guy was just too quick for me. I pulled across him as he ran by. He caught me on the side of my knee and I got swung around. I broke my leg above my knee and knocked my knee out of place. It was just awkwardness. If you’d seen me playing Gaelic, you’d know.”

Casey the Gaelic football player was the ideal clubman: driven and determined yet smart enough to realise his own limitations. He gave football everything even when football couldn’t give him the same in return. An inter-county career was always just beyond his reach.

“I did all the slogging,” he says of his involvement with county panels at underage level. “I would have been involved in squads but I would have been dropped from the 35 or the 30. There was lads there better than me. I wouldn’t have any qualms about that. If I was good enough I would have been selected.”

Instead Casey’s life has been inextricably linked with Eadestown. He has been a certainty on the starting team for the guts of 20 years since making his senior debut as a 17-year-old in 1995. The high came early, too soon for him to fully appreciate, but there have been so many lows that he cherishes the chance to play in another county final on Sunday.

“This could be my last year because the pace of the game, the training and the dieting. I’d like a Mikado with my cup of tea,” he says, highlighting a habit the modern game frowns upon. “We’ve gone through bad times but it’s great to come out the other end just by keeping going. It’s very satisfying just to make the final. It means a lot more to me.”

It’s easy to see why. Captain in 2001 and 2002 when Eadestown lost back-to-back finals against Rathangan and Celbridge, Casey was there through the darkest days of ’09 when they lost every competitive game bar one.

“It was very difficult,” Casey says of that season. “That year we might have been getting eight, nine lads training. We didn’t have a manager the start of the year so we were training ourselves. We were asking lads who hadn’t played since primary school to come out just so we had a team.”

Despite the dire circumstances, there was still a grim determination about the players.

“Lads didn’t want to be known for taking the club back to junior,” says Casey. “I would be motivated by trying to play at the highest level I can. To go down lower is just an easy option.”

In the end, Eadestown retained their intermediate status courtesy of a last-gasp goal in the relegation final against Grange. It was their only victory of the season. Five years later, Grange are still struggling to get out of junior while Eadestown are on the brink of a championship title and promotion to the senior ranks.

“It’d be great just to win something. We won a Division 3 league in 2010 and that was like my All-Ireland for two or three years, I could put my name down for winning something,” says Casey.

As to what sustains him to keep playing at 37?

“The way I look at it, you have to do something to keep fit. I like the craic among the squad. To be honest I’d have no friends if I didn’t play football.”

A software engineer with Tickets.ie, football has been a way of life for Casey. His connection to Eadestown stretches back through the generations as far as his grandfather while his father, Liam, although originally a Moorefield man, won a senior championship with them in 1970 – the club’s one and only senior success.

“The senior team is the pinnacle of the club so it’s important that the senior team do well,” says Casey, who has also served as secretary of the club. “It’s the only thing really (in Eadestown). I know we have Kilteel village. There’s no real centre in Eadestown. It’s a hinterland, people would mix in different areas. It’s (the club) the only place where people can meet others in the area. It’s a great community thing.”

This year’s campaign represents something significant for everyone but Eadestown’s veteran full-back has more at stake. Victory would complete a life-long journey for the redoubtable Willie Casey.

By Brendan Coffey
Sports Editor
@coffeybrendan
Email Journalist
Contact Newsdesk: 045 432147
"
We've gone through bad times but it's great to come out the other end just by keeping going. It's very satisfying just to make the final. It means a lot more to me."