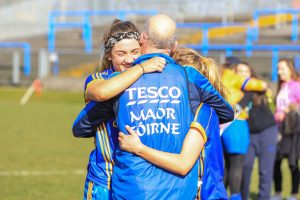 LAST Saturday was a beautiful afternoon in every sense of the word for the players, management and supporters of Cross and Passion college in Kilcullen, as they made history for the school by winning their first ever All Ireland title at the expense of Davitt College of Castlebar in stunning weather at Pearse Park in Longford.

Davitt College had two distinct periods of superiority in this game at either end of the first half, but Cross and Passion did enough either side of those spells to take a narrow 4-6 to 4-5 interval lead, aided by the sin binning of Davitt College defender Melissa Patterson for a deliberate foot block midway through the half.

The tie changed utterly in tone after the restart as Davitt College elected to send in substitute Aisling Hughes as an extra defender in place of wing forward Saoirse Walshe. That switch gave both sides an extra player in the full back line, which completely curtailed the scoring rate. After conceding an equaliser in the first minute, Cross and Passion held their opponents scoreless for the twenty minutes that followed and with six minutes to play, they had accumulated a five point lead, 4-12 to 4-7.

Two late scores from frees left the Castlebar students within striking distance for the closing minutes, but by now the Kilcullen students had completely strangled the life out of the Davitt College inside forwards and they never looked like letting go of their momentous victory.

Nobody would have expected such a closely fought second half after the free flowing activity in the first thirty minutes. Ellie O’Toole gave Cross and Passion the best possible start when she powered through the Davitt college defence and blasted the ball to the roof of the net after just thirty seconds, but that score appeared to just stun the Castlebar students into life as what followed was ten minutes of all-out attack from the girls in green. A long range free that crept into the top corner of the net kickstarted their push and another 1-2 followed immediately, before O’Toole helped to peg the gap right back with another barnstorming run, this time feeding Kayleigh Humphries for a second goal.

That match took a massive turn in favour of the Kilcullen girls in the 15th minute when Caoimhe Ó’Fearghail cut in from the left wing and had her shot on goal blocked by the foot of Melissa Patterson. Referee Conor Dourneen awarded a penalty, which was slammed to the net by O’Toole, while he also issued a yellow card to Patterson, giving Cross and Passion a numerical advantage for the next ten minutes. They made that count by building up a five point lead, and it was needed as Davitt College roared back in the five minutes before half time with two goals.

Ellen Dowling restored Kilcullen’s lead with two points before half time, but few would have imagined that a one point gap was anything to speak of in a fixture like this.

However while the points and goals flowed like water in the first half, the river ran dry after the break. Laura Brody equalised for Castlebar after barely a minute, but Cross and Passion now had an extra player in the back line, which allowed full back Daire Smyth to attack the ball with much more freedom. She executed a string of clearances as quietly, inexorably, Cross and Passion rebuilt their lead. Cáit Mulreid was moved to the full forward line and she justified that switch with a nicely taken point, Emma Wheeler added another score from thirty metres out, while Dowling, Ciara Wheeler and Nanci Murphy all tacked on points to build up a meaningful lead. Two Davitt College frees cut the gap to three, but where once the goals came thick and fast, Cross and Passion were now really on top in the back line and they never looked like relinquishing their hold in the closing minutes.

Kildare Move Closer To 2B Promotion