Breen set to live the dream at Dens Park 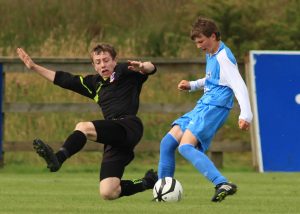 EVER since he was a young boy, Rathangan youngster Joe Breen has had a dream to play professional football and that chance will arrive for him in the summer when he signs a two year deal with Scottish Premiership side Dundee.

The highly rated 16 year old was pursued by a number of clubs but felt more at home at Dundee which is why he chose them ahead of the likes of Brentford and Stoke.

“I had been over with Brentford and Stoke but there was a good feel factor about Dunde,” said Breen.

“When I was over there, the digs I was staying in was nice, the people were nice and I got on well with the lads. At Stoke and Brentford, it didn’t feel as welcoming as Dundee. When I was at Dundee the lads were dead sound, it just felt more welcoming.”

Breen began his football career with his local club Rathangan and as well as helping them to a national quarter final, represented the Kildare league side at two Kennedy Cups, captaining the side in 2013. He signed for Dublin side St Josephs after that competition and when he completes his second season with that club in a few weeks, he will travel to Scotland to sign terms with Dundee.

“I didn’t really believe it at first, I found out about it on 1 April so I thought it was an April Fool’s  joke at first. I’ll go probably go over on 27 June and then sign the next day. I’ll be straight into pre-season when I get over there, I’d say it will be tough, there will be a lot of fitness work but I’d say I’ll cope well. It will be tough for the first few weeks getting used to the full time training but hopefully after a while I’ll get a grip. I’m looking forward to it anyway, I’d love to train every day. You are finished around three or four every day so you can go home then for a sleep if you’re tired.”

“Ever since I started playing my dream was to go over to England or Scotland to play football and now that I have the chance, it’s like realising that dream and I can’t wait to get over now. I’d like to thank everybody, the likes of Pat McNally and Brian Kaye in the KDUL and everybody else who have been so helpful over the last few years. When I moved up to Dublin, managers there were a big help too and everywhere I’ve gone people have been great too so I’d just like to thank them.”

Another who has been a massive influence on Breen has been his father Mick who managed his Rathangan side when he played with the club.

“When I was playing in Rathangan it was my Dad and my auntie who were managing me, it was a family based club. You’d know by him that he is delighted with it,” said Breen.

Breen possesses a quality left foot which means that as well as his favoured position of midfield, he can also play at left back but he prefers to be in the centre of the action.

“I’ll be training every day. You go in around 8 or half 8 in the morning, have our breakfast and then we’ll set up the first team’s training, we’ll get all the gear ready, put it into the vans and head down to the training pitch. Then we’ll do our stuff, go back to the stadium for lunch and then do a few jobs. On a Wednesday, I think we do college work but I’ll find out more when I go over,” he said.

It will be a wrench to leave home but Breen just can’t wait to get started.

“I can’t wait, I’ll obviously miss home a bit but it’s going to be a good experience, it’s all I wanted since growing, I always wanted to get the chance to go aboard and play football. Now that I have the chance I may just take it.”

A big man with a big future