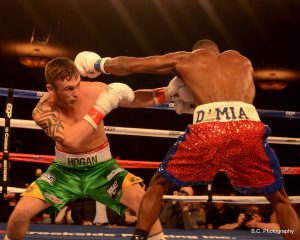 PROFESSIONAL boxer Dennis ‘Hurricane’ Hogan added to his collection of belts when he won the WBA NABA USA title after beating Tyrone Brunson in the early hours of Saturday morning in Minnesota, America

The win extends his streak of the longest unbeaten streak of all active Irish professional boxers and cements his place in the top 10 world rankings. It also inches him closer to a shot at the belt he really wants, the world title.

“It’s great to be 22 fights undefeated, ranked 10 in the world and we were told before the fight that with a win we could possibly reach the top five. That would be the icing on the cake after a good performance,” said Hogan when speaking exclusively to the Kildare Nationalist .

His opponent arrived in the ring with a fearsome reputation having won 19 of his 20 fights by way of first round knock out but Hogan always  felt in control of the bout.

“I had to watch his right hand like a hawk. His reach was 75 inches, mine was 68.5, so he had a reach advantage on me and watching all that was awkward but I just had to get my distance right and my timing perfect and luckily enough I was able to get off the shots that I wanted to.”

“I knew I was three rounds up at the start, I came back after the fourth round and thought I might have given away a round there but every other round after that I felt in control. At the end of the fight I would have thought it was a nine round to one win,” he said. 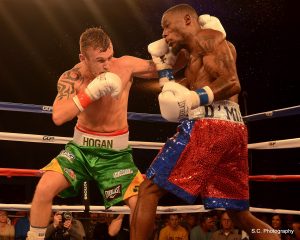 Hogan again entertained a lively crowd and continued the trend of him having huge backing for any of his fights. He certainly had built up a huge fanbase, that he calls his Green Army, when fighting out of Australia and he is planning to do the same in America with a date already in place for his third fight Stateside.

“The fight was on live CBS Sports which goes out to 98 million homes. We’re back CBS again on 26 June for another big fight night at Niagara Falls. I hear there is a lot of Irish up in Niagara Falls so I’m looking forward to seeing a good crowd at the fight. Hopefully we can make it like it is in Australia, support wise, over in the States.”

That Niagara Falls bout will just another stepping stone on a path that Hogan hopes will eventually lead to a world title fight.

“There is a big feeling to it. Number ten in the world at the moment and the rankings are out again on 5 May and I’m expecting to fifth or sixth in the world. Another win and who knows, you could slip into a mandatory position there within six months. It would be a dream come through to get that fight but to win it would be unbelievable and that is all I am thinking about. My life is going into it, I’m eating, sleeping and breathing boxing. That vision of being world champion just keeps me going and keeps me getting stronger and improving all the time,” he said.