Kelly hoping to overcome injury problems ahead of a big summer 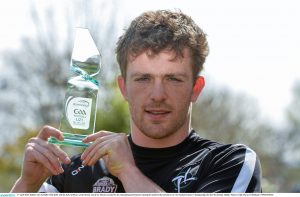 ATHY’S Niall Kelly received the Eirgrid Under 21 Footballer of the Month award last Friday, off the back of some excellent performances in the Leinster Championship.

However, it didn’t all go well for the UCD student, who was forced to exit the Leinster final loss to Dublin through injury after 56 minutes in Navan.

“It’s always nice to get an award, but I suppose it is a bitter sweet sort of award in that I would swap it for a Leinster medal any day of the week,” he told the Kildare Nationalist.

“It was disappointing with how it finished with the Kildare Under 21s, but I suppose you have to move on from those things and defeats like it.”

Injuries have taken their toll on Kelly, but he is hoping to be back on track for the Kildare Club Championships next month.

“At the moment I have a bit of a hamstring problem and it’s a bit of a nuisance alright. With the amount of football being played you are always going to get knocks and bangs, so you have to just get yourself right for the next day out,” he said.

“With the way this year had been going, I’d been pretty happy with how my football had been going, but then suffered a bit of a knock, but I suppose there was a silver lining in it as well that I’m happy it didn’t happen in two months time, when the Championship was in full flow.

“I’ve a few weeks now to get myself right, and get myself in shape for the Championship and hopefully play a big part in making Kildare successful this Summer.

“The physio has been giving me a time limit that hopefully I will be ready around the time of the Championship.

“I’ll be hoping if everything goes well that I’ll be back, but I wouldn’t rush it and hopefully there will be a lot more football to be played throughout the Summer.

“It will be touch and go, but hopefully everything works out well fingers crossed.”

With Kelly in action for Kildare Seniors and 21s, UCD and his club in recent months – it certainly has been busy times.

“It has been a busy few months with college, Under 21 and Senior. It’s all about managing the kind of teams and trying to perform well for them all.

“It can be hard if you make it hard on yourself. I was lucky with the managers I had in that they were very good to me and they managed my time and my workloads pretty well.

“I was able to hopefully perform up to my best with whatever team on any given day.

“Jason (Ryan) provided me with a lot of freedom in that I was able to play Sigerson and Under 21s and hopefully play pretty well and help contribute.”

Speaking of managers, Kelly says he was very impressed with Bryan Murphy as Kildare Under 21 manager.

“I worked with Bryan for three years at Minor as well, and I would consider him as a friend at this stage having worked with him for so long.

“He’s so good to everyone and he tries to put everything in to making a team successful. There’s no stone unturned in doing the best for everyone.