NAAS man John Burke’s reputation precedes him. The “failed soccer player” turned college and professional basketball player turned coach of fifteen years commands the highest level of respect as his 7 foot frame stands over a microphone to address the crowd. 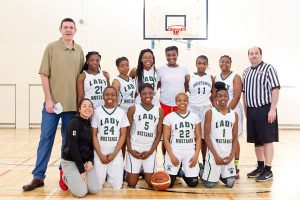 “Be a good person for the sake of being a good person, work hard and stay true to yourself and the rest will take care of itself” he says. He has brought 25 girls from his high school in the Bronx, New York to Naas as a cultural exchange to show the girls what the world looks like outside of the Bronx. It is an effort by John to show the girls that if you work hard and be nice people will in turn welcome you with open arms. The Lady Mustangs high school basketball team who represent Harry S. Truman high school in the Bronx landed on Holy Thursday, played basketball and soccer against teams from Naas and were welcomed by the families of Naas Basketball Club. It is the third trip that Burke and his team have made to Ireland having spent three years fundraising and organising. “These are the kind of girls who you read about that beat the odds as athletes and what they achieve as students.” John Burke – the Naas native says.

When you mix in the hospitality they have been shown that included very reasonably priced board at Kerdiffstown House, money donated by the Naas Lions’ Club, several host families such as Anne Marie Friel’s and Patrice Clancy’s household taking in girls, a free meal from Tony Roma’s in Naas, very reasonably priced meals from places such as The Capri Grill, The Peony Court and the countless hours put in to organising a safe and fun trip for 25 girls, most of whom didn’t even have a passport prior to the trip. They travelled to Glendalough, Kilkenny and got to see Ireland’s wonderful landscapes and this is something that John thinks will help them in their journey through life.

For John Burke it is a very emotional time on his return. “My parents are both gone but I have my uncle Kevin, who is 88 and my Aunt Gretta, who is 84 and they still live here so that is a huge thing for the girls to meet my family and the people I love the most.” The main man in the whole story is Joe Clancy who has coached an entire generation of coaches and players causing a ripple effect that has “gone full circle” given the fact that his son John Clancy played national league in Ireland and captained Kilester Basketball Club in Dublin for a number of years before John’s daughter and Joe’s granddaughter made the under 15 Irish National squad. The 30 years that Joe has put into Naas basketball has had repercussions for a number of people.

The big deal in the United States is receiving College division one and two basketball scholarships and Burke has coached several girls who have achieved this goal. These are scholarships that cost in the region of $160 thousand dollars and two of the girls that acted as chaperones on the trip had received full scholarships worth in the region of $250,000 and ended up playing professionally in some of Europe’s top leagues last year. He uses these girls as examples of just how far you can go with the right attitude. “I tell all my girls that for a 21 year old black woman with a college degree the world is your oyster,” he continues, “whatever it takes to get that then you do it and it doesn’t matter what’s unfair or what is going against you.”

The final night of the girls trip consisted of a cultural lesson for everyone at the event in Kerdiffstown house including an Irish dancing class followed by traditional African dancing due to the fact that many of Burke’s students are first generation Africans living in New York along with several flowers handed out for all the parents, mentors and organisers that put so much time and effort into the eight day trip. Burke and his team return to the Bronz where he has turned a division two school into the highest respected division 1 school top team in the Bronx. People from outside their catchment area send their daughters to be coached and mentored by Burke and know if they have the right attitude then they will be pushed hard to work athletically and academically.

John returns having shown his girls just how nice people can be and the people from Naas who encountered the girls would say the same for their visitors. Throughout the week they played basketball and soccer and go home with an appreciation for the friendly nature of their coaches’ home nation.

Out & About at Moat Club outdoor production – Much Ado About Nothing