Hyland taking his chance with Rovers

CRAIG Hyland has taken the scenic route to the top of the League of Ireland. The young Naas man has included stints at Bray, Crumlin, Newbridge Town, Longford and Waterford on his CV to date but he had to wait until this season at the Tallaght Stadium to really make his mark on the league. 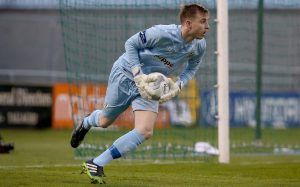 The uncertainty that comes with being an unestablished goalkeeper in the league of Ireland is something that the 24 year old has come to terms with but he has eyes on solidifying himself as Pat Fenlon’s number one and building on what has already been a successful season.

There was a period at the end of last season and just before Christmas when Hyland was ready to pack it in. He had completed an interview for a job and was getting ready to turn his back on a goalkeeping career that had started in his hometown thanks to his father Mark’s love for the game.

“I had even gone as far as doing the training for the job and if I had started that it would have been the end of league of Ireland football for me because it was a full time job and I felt like it was the right time but I got the call off Shamrock Rovers and I haven’t looked back since.”

Barry Murphy, who was Fenlon’s first choice for the start of the season, had accumulated enough yellow cards last season to merit a suspension to start the season and Hyland was given what he thought would be a rare chance to impress.

“I knew that if I signed back that I would at least get a chance to start the season in goals and luckily enough I played well and have been there ever since,” Hyland continues

“I have started every league game and I have 10  clean sheets in the 15 league games I have played,” said Hyland, speaking before Monday evening’s clash against Derry City.

Along with Dundalk’s Gary Rogers, he has conceded the fewest number of goals, seven, in the league this year which is quite the accomplishment when you consider that at the start of the year he was just hoping to contribute when necessary.

Hyland is only 24 and hopes to have another 15 years of goalkeeping to look forward to but has a keen interest in coaching that he got the chance to harness alongside his father with Naas Utd in the KDFL last season.

He admits it is strange for such a young player to get into coaching but he has had the chance to learn from some of the best coaches and goalkeepers in Irish football thus far and learned from each and every one of them.

“I’ve done a lot of youth stuff and worked with a lot of DDSL teams and that type of thing so hopefully I will look to do my badges over the next couple of years,” he said.

Hyland is confident of one thing, he says “I definitely will stay in football once I’m finished but I hopefully I have a long way to go yet.”

Shamrock Rovers play Bohemians on Friday night in a game that could make or break their season. It will be Hyland’s first away derby and suffice to say he is looking forward to the atmosphere at Dalymount Park.

“We are very close and Bohs are competing at the right end of the table this year and are doing well under Keith (Long) this year so it should an excellent experience.”

Shamrock Rovers look set to push Dundalk all the way this season and a large part of that is down to Hyland’s rise as one of the league’s best shotstoppers.