Donnellan reads Munnelly to save the day

YOU could talk to any number of goalkeepers and they will give you their different ideas on how to face a penalty but for Mark Donnellan, it’s a case of trying to get inside the mind of the taker. 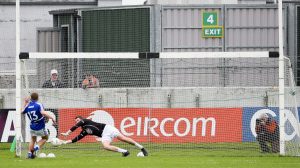 “I always fancy myself in penalties, there is no pressure on me, it’s all on the taker. To save it was nice but to win the game was the most important thing,” he said.

His 11th minute stop from Laois captain Ross Munnelly prevented them taking an early lead but it wasn’t guesswork that made Donnellan dive to his right.

“I wouldn’t say I picked a side, I was trying to read him, I’d always say a leftie never goes across his body and that’s the way it worked out,” he said.

However, like any goalkeeper, Donnellan wanted a clean sheet and while Donie Kingston’s goal didn’t ruin his night, it was playing on his mind.

Donnellan was as much a spectator as any fan in the stand as Kildare ran riot for the first ten minutes of the second half and he enjoyed what he saw from close quarters.

“The start to the second was unbelievable, when we click like that it’s just sick to watch. They didn’t get the ball into our half, we just put them to the sword. We went from being one point down to leading by double scores so it’s very satisfying.”

It was even more rewarding given that 2015 has generally been a struggle and it was nice to have a response to those doubting the team.

“There’s people always writing us off but we know what is in that dressing room and what we can do on our day. We showed that today and hopefully we can bring that on to the next day.”

Donnellan said that even though results haven’t been great this year, the confidence in the squad remains undimmed and they always had faith that there was this level of performance in the team.

“We always have confidence and we know that on our day we can match anybody. To show that on the pitch today is nice.”

Appeal for Kildare GAA stories for book and association archives