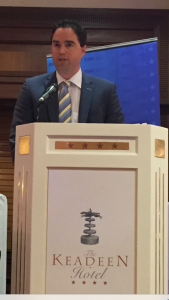 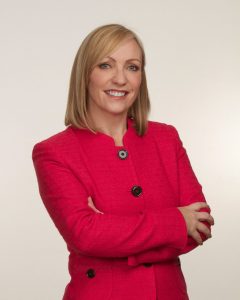 SITTING TD Martin Heydon and Cllr Fiona McLoughlin Healy have been selected to contest the next general election on behalf of Fine Gael in the Kildare South constituency.

A directive from Fine Gael headquarters, which was read out on the night, stipulated that two candidates be selected, one of which had to be female.

Outgoing Fine Gael TD Martin Heydon said that he was delighted and honoured to have been selected by the members of Fine Gael Kildare South.

Speaking at the selection convention Deputy Heydon recounted his work over the last four and half years for the people of Kildare South.  Securing funding for the Athy Southern Distributor Route, working with businesses and schools in Newbridge, assisting with Leader Funding for Community Centres in Castledermot, Suncroft and Rathangan, and getting a commitment on the sale of Magree Barracks were all highlighted.

“Locally I am working passionately to improve the management structure of the magnificent Curragh Plains, a 5000 acre amenity that lies in the heart of South Kildare. Following my recent survey of local users of the plains, which I recently presented to Minister Coveney, I am now calling for the establishment of a consultative forum to be chaired by the Department of Defence, where those locals who use this great amenity for recreation or to explore its rich heritage can have a say in how it is managed into the future. I am meeting department officials later this week to pursue my proposal. As chairman of Fine Gael’s internal agriculture committee, I’ve seen at first hand the role agriculture has played in our national recovery. As I work with Simon Coveney in drafting the Fine Gael manifesto on agriculture I see the huge opportunities for rural areas of Kildare.”

Deputy Heydon was proposed on the night by former party leader Alan Dukes and seconded by Athy member and local business woman Jo Coyle after being nominated by members from all Fine Gael branches in Kildare South.

Deputy Heydon said he believed he had the passion, the drive and the experience to bring Kildare to the next level and he asked the members of Fine Gael Kildare South to support him to continue his work in Kildare South.

Cllr McLoughlin Healy was elected to the Kildare-Newbridge Municipal District for the first time in May of last year. On the night she was proposed by former councillor Tony O’Donnell and seconded by local party member Brenda Sweeney.

Cllr McLoughlin Healy said she was delighted to have been nominated.

“A huge thank you to my family, my friends and volunteers for your practical help and unfailing support.Thank you for sharing this journey,” she said afterwards.

“A special thanks to my proposer former Cllr Tony O Donnell, and my seconder Brenda Sweeney for your especially lovely words. And finally huge thank you to everyone who turned up to support even though you didn’t have a vote,” she added.

Cllr McLoughlin Healy received a Law and Politics degree from NUIG and an MSc in PR, Communications and Advertising at Ulster University. She started a number of websites including a property sales website Privatesellar.ie and a celebrity booking service GiftEncounters.com.

The mother of three has also been a regular contributor on a number of television shows including TV3’s *********Midday********** and is married to Bernard Healy, a GP based in Newbridge.