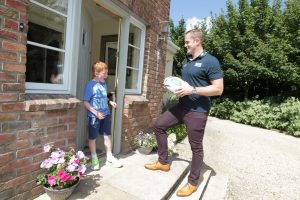 A YOUNG Kilcullen rugby player got the surprise of his life when Jamie Heaslip turned up on his door last week to let him know that he has been selected as a mascot for Ireland in the Rugby World Cup.

10 year old Sean Berney Treacey who plays with Newbridge Rugby Club, will be an official Land Rover mascot Cup 2015, Mascot at Ireland’s Pool D game on 11 October 2015 when the side face off against France at Cardiff’s iconic Millennium Stadium.

Jamie Heaslip made a surprise visit to Sean’s home this week, delivering the news to Sean in person that he will be travelling to Cardiff in October to take his place in the players’ tunnel alongside the Irish Rugby captain. In front of his excited parents, Sean was told he’ll have the opportunity to lead out the national team in Cardiff and sing the national anthem in front of 90,000 passionate Rugby fans.

“It was an emotional experience to visit Sean and see his reaction. It is the peak of any rugby player’s career to reach a Rugby World Cup and thanks to Land Rover, Sean, who is obviously an incredibly passionate rugby fan, will have the amazing chance to experience the pinnacle of the global game first-hand,” said Jamie.