WITH a total of four tries from six games, Kilcullen’s Jenny Murphy was one of the star performers for Anthony Eddy’s Irish side at the UCD Bowl last weekend, as they booked their place on the 2015/16 Women’s Sevens Series with a second-place finish in a highly-competitive Qualifier Tournament. 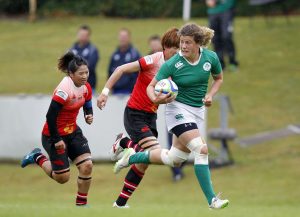 Jenny Murphy on the way to scoring a try against China in the World Rugby Women’s Sevens Series Qualifiers at the UCD Bowl
Photo: ©INPHO/Colm O’Neill

The Green Army required a top-two finish in order to secure a spot in the series, and even though their dramatic 13-12 reversal against Japan in the showpiece decider was a bittersweet moment for the host nation, Murphy was nevertheless delighted that the squad achieved their stated objective.

“Coming into this weekend, our ultimate goal was a top-two finish, which we’ve achieved. But in saying that, when you get into a final, you want to win it. Unfortunately, today [Sunday] we didn’t do that,” Murphy remarked.

“A lot of compounded errors, and we were a bit naive at times, so I think that cost us in the end. 12-0 up and then losing right at the very end is a hard pill to swallow, but ultimately we’ve achieved what we wanted to. So, I have to happy enough with being back in the World Series.”

A thrilling 26-14 triumph over South Africa in the penultimate round yesterday afternoon ensured that they will join Japan on the World Circuit, and having lost to the same opponents in their third Pool C fixture on Saturday, Ireland displayed great character to overcome this particular obstacle.

An impressive performance in the quarter-final against China set-up this crunch encounter, and Murphy feels it was important to have that game under their belt leading into the re-match with South Africa.

“That loss on the first day against South Africa was tough, but I think it worked out well for us in the end. We came all guns blazing on day two, and against China; a big, physical team.”

“We coped well with that, and then we finally got a chance to have a second crack at South Africa. We were delighted, and we had a good game that game too.”

Due to her experience at 15s level in recent years (she has won two Six Nations Championships and appeared at the 2014 World Cup), Murphy was a suitable choice for women’s sevens.

However, the net has been cast wide for the squad, and in addition to former hockey international Audrey O’Flynn, team captain Lucy Mulhall had a strong background in ladies football before her recent move to Rathdrum RFC.

Murphy acknowledged that this was beneficial for the group, with each player bringing a different dynamic to the environment.

“There’s players from across Ireland that have come over from hockey, gaelic football, and 15s rugby as well. Every player has brought something to the team, and aim to bring a bit more. It’s a good bunch, and we’re just aiming to push on now.” 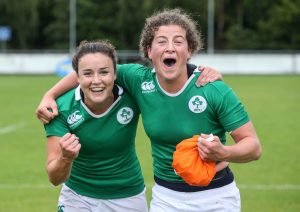 Sevens has been a unique experience for Murphy to date, as she has often found herself involved in scrummaging, as well as lifting in line-outs.

Though she is still able to play in a similar style to 15s rugby, she does believe that playing both codes is helping her to become a better player.

“I tend to be a slightly bigger player on the sevens pitch in terms of physicality than maybe I would in 15s. I wouldn’t call it propping, it would be fake propping as some of the girls in the 15s would call it. Different positions, but at the end of the day, it’s still throwing around an oval shaped ball.”