‘A dark act of pure evil’ 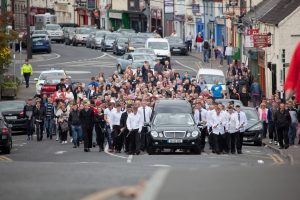 The funeral of Jason Doogue, Athy, Kildare.
(No Credit please)

THE killing of Jason Doogue was described as a “cold, calculated, callous and cowardly act” and “a dark act of pure evil” by the priest officiating at the funeral mass yesterday morning.

Curate Fr Brendan Kealy said he spoke behalf of the community in Athy in condemning “this extreme act of recklessness with the devastating consequence of the loss of Jason”.

“We are gathered here today as a shocked community in mourning not only to remember Jason but also to support the Doogue family in this heart wrenching time of grief caused by the killing of Jason, a killing that was as a result of a cold, calculated callous and cowardly act that beggars belief,” said Fr Kealy.

He said Jason’s death was as a result of “ a crime that was without any justification”.

The funeral cortège arrived at St Michael’s Parish Church shortly after 11am on Monday morning with a guard of honour of Jason’s friends leading the hearse as it made its way to the church.

Inside Fr Kealy, who was assisted by Fr Tim Hannon and Fr Philip Dennehy, welcomed members of Jason’s family including his siblings, John, Patrick, Savanah, Aissa and Stephanie, Jason’s aunts Margaret and Lizzy, grandmother Margaret, niece Cheyenne and other members of the Doogue family to whom he expressed his sympathy and that of the whole community.

Family members brought mementoes of Jason to the altar where they were placed on the coffin by Fr Kealy. They included a football which Fr Kealy explained was the one used by Jason when playing with his nephews and nieces.

The second item was framed piece of art which Jason had made for his granny on the occasion of her birthday. Within the frame was a hanky on which Jason had painted a picture of a rose, a rock and a set of rosary beads with the words ‘Happy Birthday Nanny’ in artistic script at the top of the piece and the words ‘Love Jason’ on the bottom.

The prayers of the faithful were read by Shauna Price, Mary Ellen Doogue Kavanagh, Jason Moriarty, Ryan Leonard and Zara Moriarty while Jason Moriarty read a poem which had been written about his friend Jason and there were also prayers for carers, including those who had cared for Jason.

During his homily Fr Kealy spoke of how Jason had grown up and had attended school in Athy, firstly at St Michael’s and later at the Christian Brothers school before completing his education at the Athy Community College.

The priest noted also how Jason had been full of fun and mischief and had loved being the centre of attention and he spoke of when the camcorder was taken out for home movies and Jason had been the star of all of the productions.

The congregation was told that having completed his Leaving Certificate Jason secured a place on a FÁS Craft of Woodworking course and was a talented craftsman and artist. Among the items he made was a timber blanket box which he made for his niece Cheyenne, an item Fr Kealy said she would treasure for the rest of her life.

The priest spoke about Jason Doogue’s sense of humour for which he would always be remembered. He also spoke of Jason having a heart of gold and a hearty laugh and he said; “Jason was a young man who was full of life but unfortunately he wasn’t given a chance to live it because he was cruelly cut down in his prime.”

Following the communion Jason’s sisters Aissa and Stephanie read verses which had been written for their brother.

Stephanie said that as her older brother Jason was a beautiful person who was caring and who had a heart of gold. She said he had taught her loads of things and she went on to add: “The one thing you forgot to teach me was how to let you go. I will miss being your little sister, you are forever in our hearts.”

In conclusion she said 1,000 tears wouldn’t bring her brother back and she said she knew this because those tears had been cried.

Aissa thanked her brother for the memories he had given the family and she said these would warm their hearts each day.

Music throughout the service was by local woman Jacinta O’Donnell and included ‘Reach out and touch somebody’s hand’ which was sung during the offering of the sign of peace, a liturgical version of *********Let It Be******* by The Beatles, ***It’s been a long day*** by Sam Smith and a Celtic Blessing as the coffin was being blessed.

Jason’s body was taken from the church by friends and family family and he was laid to rest at St Michael’s Cemetery after the funeral mass.