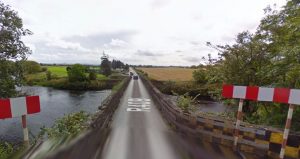 BUSINESS owners and residents in Caragh village made a number of calls this week to have the narrow bridge that gives road access to Naas and the M7 reopened.

Local representatives highlighted the issue and Cllr Robert Power has written to the Minister Transport asking for emergency funds to repair the bridge.

Kildare Co Council closed the bridge for safety reasons after it was damaged on 22 August and said it will remain closed until further notice.

Locals have been told that it could take up to three months for it to be repaired.

Mayor of Naas Cllr James Lawless said residents and business owners in Caragh have been left stranded without suitable road access to Naas or M7.
“Kildare Co Council is fully stretched right now and schools have reopened. Traffic levels in the area are reaching crisis levels,” he said.

“With this bridge closure on the main artery between Naas-M7 and Caragh we need a quick solution to reopen the road.”
He added that business owners have felt a collapse in trade since the closure.

“Employee hours are being cut because business has dropped so much. A couple of months of this will be a deep blow to the local economy which is dependent on the passing trade. It is imperative that government provide emergency financial assistance to end this crisis.

“Furthermore, this particular crisis also highlights the precarious traffic situation in the wider Naas area and underlines the need for the Osberstown-M7 interchange and Sallins by-pass to be fast tracked.”