Kildare people at home and abroad respond to crisis 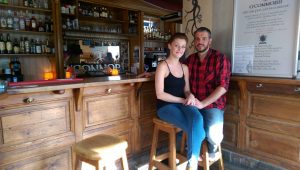 KILDARE people here and abroad have been out in force in recent days helping with the refugee crisis.

Locals who are doing what they can to help include Naas man David O’Connor.

David, who is from Lakelands in Naas, owns the popular O’Connor Old Oak pub in Vienna and last week set up a massive aid drive.

From a collection point at the pub David and fellow volunteers are accepting and sorting through donations. They are following charity twitter and facebook feeds and delivering requested items to the main train station in Vienna where they are then transported to the Traiskirchen refugee camp, which is 40 kilometres outside Vienna.

“For example we have two boxes of men’s shoes, sized 42 and 43, because this is what is needed. The temperature has dropped here so we also have hats, gloves, heavy coats and rain coats, things like that.”

David, his girlfriend Alex Hesling and friend John Milner from Bantry, decided to put out an appeal to the expat community after friends visited the camp and said conditions were tough and overcrowded.

“This is a massive community effort,” he added. “We are trying to make it as easy as possible for people to make donations. We have had a massive response. A lot of our friends are supporting us and sharing posts on social media, it has gotten the message out quickly.”

David, who has been in Vienna for 18 years, said the plan was to see how many donations they could get during the week and for the past five days they have been boxing and sorting items.

“Everyone has been so generous. Not an hour goes by that someone isn’t arriving into the pub with a bag of clothes or toys for the children. Then we sort out the contents into groups.

The Kildare Volunteer Centre has also put out a call this week for volunteers to help sort through items and befriend refugees. They have been asked by the Department of Justice to assist with arrival of refugees at the reception centre in the Hazel Hotel, Monasterevin.

Working from their Newbridge office, which is located on Edward Street, Cutlery Road, they are accepting and sorting donations. They say they are particularly looking for bicycles and toys for the children and as of now have enough clothes. Volunteers are needed to help with the donations and befriend the refugees.

“We are looking for people to meet and talk with people, maybe take them out for a coffee and make them feel welcome,” said Mick Power from the Kildare Volunteer Centre.

“These people will have to be interviewed and garda vetted. We will also provide them with some training as the people they will be dealing with are very vulnerable and have been through a lot.”
Interested people can register for both positions on their website www.volunteerkildare.ie.

The possibility of housing refugees at vacant army barracks and state buildings around the country is also being considered by the government.

The Department of Public Expenditure is drafting a position paper ahead of this week’s Cabinet meeting examining the short, medium and long-term accommodation options for refugees and how to fund them.

Following reports that the Government is to examine the possibility of housing refuges at the Magee Barracks in Kildare Town Cllr Joanne Pender said it would make much more sense to use vacant houses at the Curragh Camp.

“There are perfectly good houses there that would not need a lot of work,” she said.

“They only buildings at the Magee Barracks are concrete shells. There are around 12 to 14 houses that are boarded up in the Curragh and I have been calling for those to be used for homelessness or social housing already. They could be used to help with the refugee crisis with just a little work.”

The Kilcullen Refugee Solidarity group held a donation drive for refugees in Calais and elsewhere in Europe.

Throughout yesterday (Monday) donations were taken in at the Kilcullen Community Childcare Centre. The donations will join a convoy which is leaving Ireland on 29 September and will stay for a week to work with groups in Calais.