ATHY’S Kevin Feely is targeting a return to county football as he resumes life as a student this week.

The 23-year-old left Newport County in August, ending a three-year spell as a professional soccer player in the English Football League. Feely has since returned to his first sporting love with Athy, helping them overcome Naas in a county semi-final on Sunday. 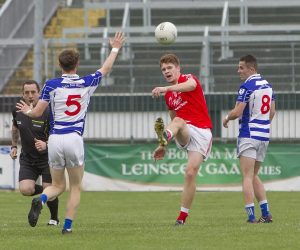 Kevin Feely in action for Athy in their SFC quarter-final win over Naas.
Photo: Piotr Kwasnik

“The days when Athy were playing championship while I was in England were brutal,” said Feely. “And when the Kildare  under-21s won Leinster in my own age, it was hard to take. Missing out on big years kind of helped influence my decision. I felt I had a bit more to offer to Gaelic than I had to soccer although I had a chance to make a career over there. The fact that I was constantly thinking about Gaelic while I was over there probably told me that my heart’s not in this.”

The former county minor began a soccer scholarship at DCU in 2010, where he was studying physiotherapy. Two years later he moved to England, having signed with Charlton Athletic. This week he is back on campus in north Dublin, belatedly beginning the third year of his studies.

“Finishing the degree and getting back playing Gaelic football were the main reasons behind coming back,” said Feely. “Soccer is not in my plans at the moment.”

When asked about the possibility of playing with Kildare again, Feely was unequivocal.

“I’d love to get involved,” he said although winning a second county title with Athy is his immediate goal.

“I’m just delighted to be back and helping in some way. We’ve only got one focus this year and that’s championship. If I could do something towards helping us win that or getting as far as we can, I’m happy,” said Feely, who came home to a club that was reeling from a shock defeat to St Laurence’s in round two. Although they were still in the championship, the players pushed for a new manager. Since Pascal Kellaghan’s departure, the team have recovered to reach the semi-finals.

“As a group they just felt we needed a change to move back in the right direction, they were just a bit upset after the two Larries games,” said Feely, who only returned to the fray for Athy’s round three clash with Allenwood. “They felt a change was needed to spark us into life. Fair play to the boys, they made a decision as a group that was brave and for the last two games we’re proving the point to ourselves, which is huge.”

Athy’s revival has coincided with Feely’s return although it seems like a long time since he was lording midfield during the club’s 2011 championship victory.

“Walking around college this week for orientation with first years, I did feel very old,” Feely admitted. Now he’s hoping to turn back time on the football fields of Kildare.