Crofton out to avoid unwanted three in a row

AS a club, Sarsfields are rightly proud of being last side to win three Kildare senior titles in a row. The achievement of the 1950, 1951 and 1952 teams are rightly still lauded and the determination to stop Moorefield from having the opportunity to match that record was in plain view for anybody in St Conleths Park when the teams met in Round 3.

However, on Sunday when they meet Athy, they’ll be looking to avoid an unwanted three in a row. The last of Sarsfields’ historic treble was won in 1952 against Carbury and that was the first of three consecutive county final defeats for the Parsonstown outfit. Nobody since has matched that bittersweet and dubious honour but Sarsfields stand on that threshold on Sunday having lost the last two deciders to Moorefield. 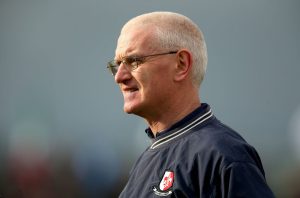 Manager John Crofton is determined that will not come to pass.

“I don’t know if I’d say we have unfinished business but we’d certainly like to come out on the winning side. It’s painful to lose finals and to lose two in a row is doubly painful. We’re hopeful that we can change that feeling on Sunday,” said Crofton.

The former Kildare boss hopes the pain of those defeats will spur on his younger players.

“We introduced quite a number of young guys over the last few years and we’ve been in finals, which is good, the losing experience isn’t great though. You’d be hopeful that they’d be inspired by not being able to get over the line in the last two years. We hope that the learning curve has been positive,” he said.

Crofton’s three years in charge of the team also brought a title back in 2012 but after such a lengthy spell in the club’s hotseat, he was open to the idea of bringing a new voice into the dressing room alongside selectors Ed Donoghue and Noel Crinnigan. That saw him turn to Kildare GAA legend Anthony Rainbow and Crofton feels the Suncroft man’s involvement has been a massive boost for the team.

“Anthony has brought in a huge amount,” said Crofton.

“My voice at this stage in the Sarsfields dressing room probably falls under the heading of tired. What Anthony brings is huge, he still has an infectious enthusiasm for the game and he has a great way with lads, particularly with young lads. His delivery and his communication skills are excellent. He has that ageless quality about him, he is still a very fit guy so when he takes a training session he’s engaged very much and lots of guys would aspire to be able to do what he still can do on a training field.”

“The other guys I have, Ed Donoghue and Noel Crinnigan, are fantastic, they do a huge amount of work and very, very dedicated club men. They are also very good judges so we had a strong platform there to begin with. Anthony has certainly added to that. He’s a very good coach and a very good judge of individuals and football skills.”

While Rainbow’s introduction may have had immediate dividends on the training pitch, it didn’t show on the pitch early in the championship but Sarsfields have responded brilliantly to a first round hammering at the hands of Sunday’s opponents. While most would pinpoint the Round 3 win over Moorefield as the turning point in the team’s season, Crofton feels that occurred during half time of the Round 2 game against Maynooth.

“We played Maynooth and they put it up to us, physically, in a big way in very poor conditions. They showed all the hunger in the first half that day. The funny thing was even though people won’t remember the second half, I think our fellas dug themselves into a hole and then dug themselves out of it. In the conditions and the way that Maynooth were playing, we just had to battle and that was encouraging.”

“That was the prelude to the Moorefield game,” added Crofton.

Once their neighbours were out of the way, Sarsfields got past St Laurences and Celbridge and Crofton is predicting that Sunday’s final will be one for the neutral to enjoy.

“I think there are good, skilful footballers on both teams and there is lots of pace on both teams. I think both teams, if they have the opportunity and it doesn’t always present itself depending on what way the opponents have set up, have players who distribute the ball well, in lots of cases with both feet, and that is always better to look at in my opinion. Irrespective of results, it’s always more a spectacle because of that,” he said.

“I think both teams will go out to play an attacking brand of football and it should be an interesting game,” added Crofton.

On the injury front, Alan Smith returned as a substitute in the semi-final and kicked two points and is pressing hard for inclusion from the start but a knee injury threatens to rule Barry Coffey out of the game.

No matter who takes to the field in a Sarsfields jersey on Sunday, they won’t be short on motivation to lift the Dermot Bourke Cup.