CROFTON: “That’s Roy of the Rovers stuff, isn’t it?”

SARSFIELDS manager John Crofton thought he had seen it all in his long and illustrious career but even he was taken aback by the events of Sunday’s county final.

“That’s Roy of the Rovers stuff, isn’t it?” he said, moments after the final whistle. 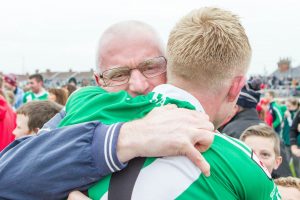 Sarsfields manager John Crofton is overcome with emotion as he embraces man of the match Ray Cahill
Photo: Piotr Kwasnik

It was the fourth time in his four years in charge that he had led the team to the county final but having lost the last two, there was no way that he could envisage losing a third in a row.

“It’s hugely satisfying, it obviously is but it’s for the group, and we’ve had a huge turnover of players. If you ask Celbridge or Laurences or even Athy how hard it is to get to a final. Getting to finals in Sarsfields, it was like an anchor in the last few weeks, it didn’t feel like we were in a county final because it wasn’t a county final anybody could enjoy. Finals are for winning and by jaysis it was for us because we couldn’t win the last two. It is a fantastic achievement and it’s a tribute to the guts, the conviction and the mindset of the group. There is great talent and it’s in their remit as to how they bring that forward in the future,” he said.

But Crofton knows that young talent doesn’t necessarily mean a period of dominance for the club and he took the chance to lash out at the treatment of some of young players. 12 months on from the club’s minor and senior teams being made to play county finals within hours of each, it’s clearly still a source of anger for him.

“I know that it doesn’t work like that, there is nobody in Sarsfields who will talk about what we are going to do. The biggest thing we showed was the pride in ourselves and fight in the dog. There were aspersions thrown cast at us, and understandably so after last year when we were five points up with seven minutes to go. What was done unto last year, what was done unto this club by forcing minor and senior fixtures together, those 19 year olds who played today were done out of the senior final last year. Officialdom and the dinosaurs in Kildare done them, hence done us, out of a title – and that’s a fact. In doing so, they unnerved the whole club because they unnerved the minor panel as well. There’s no rule or bylaw that says you must force the best players, players who have given two years as county minors and you have given everything and you are saying to them, ‘Go, we don’t want you here on county final day.’ The big day syndrome, and look at the big day syndrome today, clashed the minor final with a rugby match and last year we played an intermediate hurling final on the blue riband football day. Denied, denied denied, the young talent coming through, and it’s all white talent, not just Sarsfields talent,” said Crofton.

On the game itself, Crofton felt it was his team’s cohesion that was key.

“ We showed huge character, an awful lot of fitness but an awful lot of cohesion as well. It’s not a question of sticking to the gameplan there, lads improvised and we improvised on the sideline. In fairness to Athy, they were on top in the first quarter, we made two or three positional switches which we weren’t comfortable doing so early in the game but they all paid off.  The fresh legs and the different talents we brought on all proved crucial in the end,” he said.

Things could have went against his team when they lost Conor Tiernan to a red but county minor Conor Hartley stepped into the breech.

“As it turned out, we had to sacrifice an attacker and bring on Conor Hartley but what a guy to bring on, what an impact he had, and he’s just 18 years old. Our other 18 year old (Shea Ryan) was harshly dealt with in a minor match and missed today.”

“I think it’s remarkable that we started four 19 year olds there, we brought on a minor. I don’t know how old our average age is but we couldn’t start one of our leaders, Smithy, one of our go to county guys. Sean Campbell and Chalky (Gary White) are our veterans, Sean is 25 and Chalky is 28. The learning curve for the likes of Sean Dempsey and Ben McCormack, this is their third county final to be engaged with and they are 19.”