THE Mulhall sisters, Niamh and Rhona, were right at home in their home town of Athy as they led the second half comeback that saw Kildare Town overwhelm Castle Villa in the Joe Rooney Womens Cup Final. 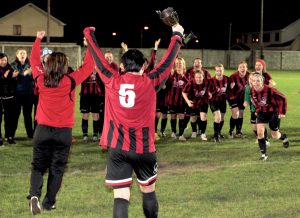 After trailing at half time, Niamh, on her 18th birthday, won the penalty the penalty that was converted by Rhona to kickstart the comeback. Niamh then scored the third and Rhona netted the fourth as Kildare pulled clear in the closing stages.

Kildare enjoyed a bright start to the game and Villa ‘keeper Orla Keeling had to be quick off her line on a couple of occasions but the first real chance of the game fell to Villa.

Nicole Byrne found some space space in the box, she placed the ball onto her right foot and smashed a shot at goal form eight yards out, but Kildare’s ‘keeper Donna Hickey was equal to the task and pulled off a strong two handed save.

Byrne was standing out for Villa in the early stages and she was again a threat as she struck a free kick just off target. And in the 13th minute the same player almost gave her side the lead as her shot from 15 yards out came back off the cross bar.

Kildare were very flat for some reason and they just couldn’t seem to get going at all, Villa then had the ball in the net in the 20th minute when again Byrne showed great skill to flick the ball around her marker and in the path of Maggie Nolan, who struck her shot first time into the bottom corner, but the goal was disallowed for offside and Kildare blew a sigh of Relief.

Villa eventually made the breakthrough in the 35th minute. Rachel Garvey did brilliantly on the left hand side, she cut inside and squared the ball to Nicole Byrne, who showed great composure before passing once more to the right and in came Shauna Mackey who smashed the ball home to open the scoring.

Kildare pushed forward after that and Villa ‘keeper Keeling had to be alert and be quickly off her line on more than one occasion to keep her opponents out but she did well and Villa made it to the break with their one goal lead.

Kildare began the second half very brightly again though and Niamh Mulhall had a shot blocked before full back Nicola Farrell struck a shot well over the bar. It must have been frustrating for Kildare, as they were doing everything right going forward, but the final ball or final shot just wasn’t there and they were in need of something different to change that. In the 53rd minute Rhona Mulhall entered the fray, and this was to prove to be the complete turning point of this game, Mulhall has been one of the most outstanding players ever since the ladies soccer began in the KDFL and somehow she was not a starter here, but at least she had a point to prove.

She wasn’t long on the pitch when she lofted a nice pass over the Villa defence and the keeper again had to be swift off her line. She looked to have the ball in her grasp but somehow it came lose over her shoulder and bounced back off the post and she was able to grasp it on the second attempt. Keeling however redeemed herself in the 57th minute with an excellent save from Niamh Mulhall who struck from ten yards out.

Kildare had Castle Villa under severe pressure now and it finally paid off in the 59th minute when Niamh Mullhall was brought down by her opposite number Catherine Dempsey and Kildare were awarded a penalty kick. Rhona Mullhall was given the responsibility of taking the spot kick and she showed no nerves whatsoever as she smashed the ball to the keeper’s right hand side and levelled the scores. 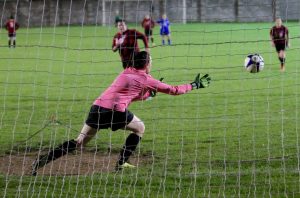 Five minutes later it was 2-1 to Kildare after great play on the left wing by the hard working Michelle Gogarty who was set away by a beautiful touch by super sub Rhona Mulhall, she then crossed all the way to the back post for Mairead Whelehan who smashed home from close range to send the Kildare support wild.

Kildare took control after that against a tiring Villa side and Niamh Mulhall’s opportunistic strike 15 minutes from time gave them a two goal cushion. 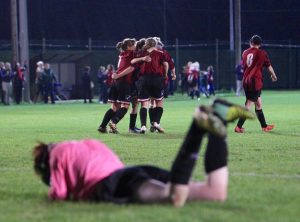 Rhona then made sure of the victory with a spectacular volley from outside the box in the final minutes.