Late developer Donnelly intends to make most of Ireland opportunity

AT the age of 28, Aine Donnelly is set to make her international debut against England at The Stoop on Saturday, a remarkable feat considering she was in her twenties before she began to take the game seriously. 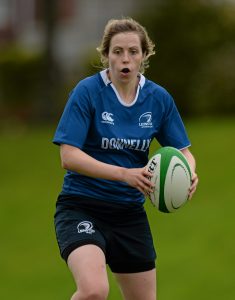 Aine Donnelly in action for Leinster in the Women’s Interprovincial against Ulster in August of this year
Photo: Oliver McVeigh / SPORTSFILE

GAA was Donnelly’s preferred sport growing up and such was her talent that she represented her county but a chance trip to training at Cill Dara RFC changed the course of her sporting life.

“I played Gaelic all the way up,” she said.

“I played at under 16 for Kildare and had a couple of seasons with the seniors too. One of the girls just told me one year to come out and try the rugby when the Gaelic was finished for the winter, it went from there and I’m playing now for six or seven years.”

Donnelly’s talents quickly shone and last year she represented Leinster in the inter provincial series but she thought that was simply down to a number of internationals being unavailable. When the Leinster squad was announced this year, she assumed that she would be back up to regular out half, Nora Stapleton, but the management had seen enough to convince them that Donnelly could do a job in another position.

“I played last year for Leinster but it was without the international girls. There were a lot of new caps in that, this year I played when all the girls were available. I wasn’t really expecting a whole lot, I was hoping just to make the squad but I made the team then and went from there.”

“I played at 10 for Cill Dara but Nora Stapleton came back into the squad, I thought I would be an understudy to her but they pushed me out to 12. I played alongside her and we’ve gelled well together.”

Again, Donnelly caught the eye and her performances for Leinster in August brought her to the attention of the international management.

“It (the call up) was a bit of a shock really, it’s all happened so fast. A couple of weeks after playing for Leinster, I got a call from the Ireland coach telling me to join up with the Dublin squad and do the gym sessions with them. I went to Belfast then for a training squad, there were 33 people on that squad and it was going to be trimmed down to 23 for the next squad. To be honest, I didn’t really expect to be selected but I got the call to tell me that I made it and that I’d be in the squad for the England game.”

Having seen so many of the Irish team on television, Donnelly was initially a little star struck when training alongside them but quickly settled in alongside the friendly squad.

“At the first camp I was a bit overwhelmed, I’d watched all the girls on the telly and saw them in the World Cup and then here I was, playing with them. It was a bit of a step up but the girls were all very welcoming and supportive. They made me feel at ease and I got to grips with it after that.”

Donnelly’s fellow Kildare woman, Jenny Murphy, is not in this squad as she concentrates on qualifying for the Olympics with the Irish sevens team but having attended the same school in Kilcullen, has been able to pass on some tips.

“I played on the schools teams with Jenny and she played a bit with Belvo when she’s not concentrating on the sevens, she has given me some advice.”

Pulling on the green jersey is always something that Donnelly has dreamed of, although not necessarily as a rugby player, but she is keen to make the most of this chance that has come late in her life.

“Getting my first cap will be a proud moment. I follow Ireland in any kind of sport and I get behind them. I’ve dreamed about playing for Ireland in any kind of sport but to do it in the rugby is kind of unexpected. I’ve been watching the girls for the last few years and now I’m going to be togging out alongside them, it’s kind of surreal but I’m going to enjoy it and hopefully I’ll take my chance and go on and get a few more caps.”

“I’ll take it each step as it comes and just work hard but hopefully just break into the Six Nations squad and do well in that and then long term, hopefully make the World Cup squad in 2017.”

** Donnelly is currently the most successful female graduate from Cill Dara RFC but there are a group of talented youngsters hot on her heels. Sabrina Kennedy has played at under 18 level for Leinster, and also played for the Irish sevens team. Although Louise Scully is currently playing with Portlaoise, she is an ex ‘Dara girl. One of the Leinster girls’ coaches is Sarah Duignan and she also coaches the girls’ underage teams in Cill Dara every Wednesday.