IT’s a fact of sport, and maybe life, that the lows of the disappointments always stick in the mind longer than the highs of glory. Ask any top level sportsman and they will always say that it is the trophies that got away rather than the ones they won that keep their minds occupied in retirement. 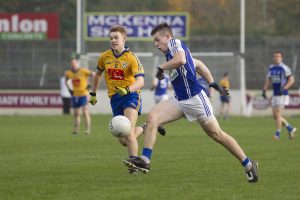 Emmet O’Keefe on the charge for Castledermot during their their Leinster Intermediate quarter-final win over Offaly side Ballycumber that set up Sunday’s clash with Ratoath
Photo : Piotr Kwasnik

Just ask Liam Cosgrave. Back in 2004, he was part of the Castledermot side that won two Leinster Junior Championship games but it is the semi-final loss to Sunday’s opponents Ratoath that sticks in the memory.

“I do remember that game, we played in Athy and lost by two points. We were talking about it the other day in training, we obviously played a few games to get to the semi-final, I can’t really remember the games before it but I remember that game. It was pretty tight and we were fairly disappointed to come out on the wrong end of it.”

“It was an opportunity we wanted to take when it was there and to see them then go on and win a Leinster title by 13 points, I think, was a little bit disappointing to say the least. You don’t look as far as Leinster Championships at the start of the year but it’s great to be in one again. It’s a great opportunity now to go and win but you don’t look at it as vengeance or anything like that. It’s ironic that it is these guys again but we have a great chance to go to a Leinster final now and there is a great buzz around the place.”

For Cosgrave, he’s just glad to be playing at all after going through a potentially career ending knee injury last year. Now 33, it wasn’t easy overcoming a second cruciate injury but the rewards this year have justified the effort.

“At the start of August last year we went up to Rathnew for a challenge game before the championship got going again. It was just a simple thing, I went over and the knee went from under me. Four years previous I had done my right cruciate and this was my left. It’s not an easy thing and it took me a few weeks to get over the fact that I had to go through it again. I set myself a goal to get back for the last couple of league games this year. I started the last game against Naas, I came on at half time in Round 2 of the championship against Kill and then was lucky enough to start every game since.  After the first one I had an idea of was required. I enjoy the work that goes into it, it’s not an easy thing to get through but once you get down onto the pitch you can see yourself getting better.”

Since his return to action, Cosgrave has quietly gone about his business in the full back line while others further up the pitch have made the headlines. That hasn’t stopped him enjoying seeing his young team mates strut their stuff but despite the skills of the likes of the Keating brothers and Aaron Murphy, Castledermot will start Sunday’s semi-final as big underdogs in the bookies eyes. Having been short priced favourites for their quarter-final but forced all the way to extra time by Offaly’s Ballycumber that is not something that will worry Cosgrave and Castledermot too much.

“The lads are down at training, they all look at their phones and see the odds, they’ve all been keeping an eye on it. The last day out against Ballycumber we were pretty short priced favourites but as it turned out, the odds don’t count for a whole lot and that’s the way we’ll be looking at this game.”

The game will played in Ratoath on Sunday 15 November and throws in at 2pm.