Hogan ready for biggest challenge of his career

AFTER 23 fights unbeaten as a professional Dennis Hogan faces the biggest challenge of his career when he steps into the ring with Jack Culcay in Hamburg, Germany on Saturday night with the WBA interim World light middleweight title on the line. 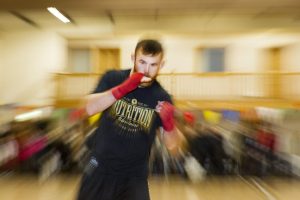 The fight was originally scheduled to take place in September but fell through at the last minute. Rather than being down at the delay of the fight of his life, Hogan feels that the extra time spent in the gym since then have made him even more prepared.

After some tough sparring at the club where is based in Brisbane, Hogan came back home to Ireland last week to go through the final stages of his preparation. He had a similar plan back in September and again spent a lot of time sparring in the famed Celtic Warrior gym in Dublin.

“I was able to train more, to get stronger, to get fitter, even more so. I’m even more ready now. Packie Collins up at Celtic Warrior even said that he thinks I’m looking even better now than I was the last time. I think things happen for a reason and I think this happened for the best,” he said.

That sparring included some tough rounds against Gary ‘Spike’ O’Sullivan who himself is in training for a huge upcoming fight against Chris Eubank jnr.

“I’ve had some great sparring in Dublin with Spike O’Sullivan and a very good Welsh prospect. The two guys were in different weight classes which was good for me. Now when I get in against a lad who is little bit smaller than me in height and is the same weight as me, I find it is going to better for me. Great sparring to finish off with, everybody was very happy with me and I was happy with myself, which is a big thing.”

With O’Sullivan so close to his fight too, both men got huge benefit from the rounds in the ring.

“Two boys running hot, you can’t ask for any more than that. We’re only a week out from where we would be in the periodisation from our fights so the two of us were running hot. It’s the best sparring you could ask for,” he said.

The fight was originally due to take place in Berlin but will now happen even closer to Culcay’s base in Hamburg.

If Hogan is nervous about stepping into such a cauldron, it certainly doesn’t show.

Culcay may have the benefit of the overwhelming support when the boxers step through the ropes on Saturday evening in the InselParkhalle arena but before leaving for Germany early on Monday, Hogan got the benefit of his own support at an open training session held at Ryston Boxing Club last Sunday. 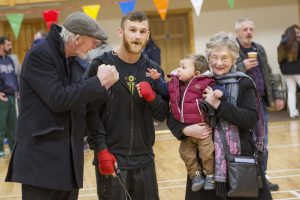 For a figher who has had all his pro fights outside of Ireland, this was as close as he has come to performing in front of friends and family. It was something that clearly meant a lot to him.

“It’s unbelievable, I didn’t expect this feeling to be so overwhelming in a good way, it’s a bit special. When I saw everybody here I was nearly as nervous coming out doing a bit in front of them as I would be for a fight. It’s unreal,” said Hogan, who was joined in Ireland by his coach Steve Dellar, pad man Brad Connor and strength and conditioning coach John Webb..

“It’s great to see the boys coming all the way over. Even when I was in Grangecon the boys were coming up to say hello. It’s unbelievable, when I was over in Australia I kind of forgot how great people are and how supportive they are in Ireland. When I come back and see it again it’s very heart warming, it’s nearly surreal.”

Hogan will need all that energy and power against a man who boxed in the 2008 Olympics but he is looking forward to the final build up ahead of Saturday night.

“It will be all sharp pad work and about making the weight. Making sure I get all the water out of my system, stay sharp and start to freshen up. Next week I will come alive, I’m a little bit in a fatigued state because of all the hard training, next week I’ll start to freshen up and I won’t be able to stand still for a minute there will be that much energy pumping through me, the adrenalin and everything, it’s going to be an amazing feeling, I can’t wait for it.”