RATHANGAN youngster Joe Breen may have already suffered one big disappointment as he enters the world of full time football but having recovered from that, he is now thriving in his first full season with English Leauge 2 outfit Carlisle Utd. 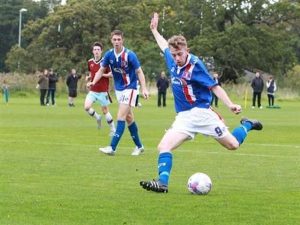 Joe Breen is settling into life as a full time footballer

Breen was all set for a move to Scottish side Dundee for the start of this season but that move failed to materialise at the last minute leaving him without a club and his dream of full time football in tatters.

“I was all set to go to Scotland and then all of a sudden after being told I was getting a scholarship, they went out of contact and I was waiting and waiting to hear from them. They never got in contact so eventually my agent rang and they just told him that they couldn’t afford to pay the scholarship. That went out the window with them. At stage I didn’t think I’d be able to get anywhere else, I was getting ready to play League of Ireland football and that was something that I didn’t want to do,” said Breen.

But thankfully, Breen was quickly able to set up another move when Carlisle snapped up the talented left footed midfielder.

“I wasn’t a happy man at that stage but two days later, Will Clarke in St Josephs and my agent were very helpful, they were in contact with Carlisle. Eventually they said they wanted to sign me thank God because I didn’t fancy playing in the League of Ireland, my only goal was to go over to England or Scotland, that’s what I wanted. When I heard I wasn’t going to Scotland it was very disheartening, I was very lucky to get to Carlisle,” said Breen, who thankful for his agent to be able to set up another move so quickly.

“After the Mayo Cup when I played for Ireland, they got in touch with them. He talked to my dad and seemed sound and ever since he’s been a great help to me, he’s doing great stuff for me. The likes of Will in Dublin, and Pat McNally and the KDUL before that, have been a great to me as well to help me along the way. I’ve been lucky as well, there’s lots of good players playing in the league of Ireland, the likes of Darron Quinn who I played with in the KDUL and he scored for Shamrock Rovers in the under 17 cup final, Mark McGinlay played for St Pats against Rovers in that final and he’s another one. They’ve been doing very well and they can count themselves unlucky not to get over to England, you have to be lucky too and it’s just worked out for me,” he said.

The move to England was a culture shock. Put in a B&B with nine other hopeful teenagers, including Mikey Quigley from Wexford, Breen had to quickly adapt to pre-season training.

“Without Mikey it would have been a lot harder to settle in than it has been but even still, training wise, it was hard to get used to because the standard was much higher. Pre-season was very hard, we were in training with pros and doing a lot of physical work but it’s not only physically tough, you’d be mentally drained as well,” he said.

Along with the rest of his team mates on the youth team, Breen trains four days a week with Wednesday set aside for college. Young trainees cleaning the boots of the professionals at may be something from a bygone era in the money laden Premier League but at lowly Carlisle, that’s just another part of Breen’s weekly routine

“It’s just something you have to do, it’s nothing bad though. I look after Luke Joyce’s boots, he’s a central midfielder, he’s sound and very approachable. It’s good that you can talk to the pros and get on with them like that,” he said. 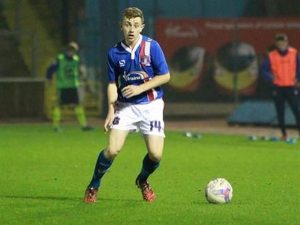 Under manager, former Irish international Alan Moore, Carlisle play in the Football League Youth Alliance Under 18 North West Division against the likes of Preston, Tranmere, Burnley and Wigan but the real excitement for the team this season has come in the FA Youth Cup.

“We got to the third round which was good because the year before they were beaten in the first round. We beat Tranmere after extra time, Doncaster after extra time and then lost to Preston after extra time. Those three were home games and we played them all at Brunton Park which was a great experience, to play under the lights at the stadium. All the first team were there to watch as well. I felt that I did well against Preston, some of the first team players told me I did well which was nice and stuff like that helps you along the way,” said Breen.

The games have also been a real eye opener.

“The standard is a lot better and the tempo is a lot higher. At first I was losing the ball an awful lot and I was getting frustrated. What I found is that the managers will help you but you have to do it for yourself as well, if you are having a hard time on the pitch you just have to put it to the back of your mind and get on with the next game, just put it behind you and look to the next game.”

“Most of the times it’s about getting the ball down and playing but there are times when the manager will see that they are playing a different formation and you have to adapt to that. There’s times when you just have to hold your position or the other team will just pick you off and it could cost a goal. Things like that over here are important,” said Breen.

With a contract until the end of the 2016/17 season, Breen knows that the next 18 months will crucial if he is to realise his ambition of winning a full time professional contract.

“I signed a two deal so have another year next year. Next year will be the big year for me, hopefully I’ll push on next year and get a good few training sessions with the first team and hopefully do well with the under 18 team as well and hopefully at the end of that I’ll get a professional deal. I’ll just have to keep working hard and please God it will work out.”

“This is always what I wanted, since I was young lad playing in Kildare and then moving up to Dublin, there was only one thing on my mind, to be a footballer. I’ve been lucky but there is nothing more that I wanted than to be playing football