NAAS boxer Gary Cully is ready to make his senior international debut after being called up to the Irish squad of the Strandja multi nations competition in Bulgaria, which started today (22 February).

Cully, who turned 20 last month, has previously won a European Youth gold medal but this will be his taste of international action at senior level.

“It will be an experience,” said Cully, who is expecting some tough fights in Bulgaria. 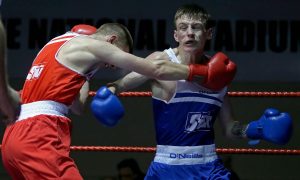 Gary Cully (Blue) will make his senior Irish international debut at the end of the month in the Strandja multi-nations in Bulgaria this week
Photo: ©INPHO/Donall Farmer

“I’m still only in the transition from youth to senior. In Strandja last year, Ireland sent a team and the only medal they got was Michael O’Reilly winning a silver so it’s going to be a tough tournament. A lot of lads out there will either have qualified for the Olympics or will be still looking to qualify so there will be plenty of experienced lads there. It should be four or five fights to win it depending on the draw, probably three fights to win a medal,” he said.

“I’ve been away loads of times as a youth but it is a different story stepping up to senior, especially with elite lads out there in an Olympic year, it’s going to be tough for everyone.”

Cully has been training with the Elite Irish squad in Dublin since his defeat in the quarter final of the Irish seniors towards the end of last year, against eventual winner David Oliver Joyce, and he feels this experience has improved him as a fighter.

“I’ve been sparring Sean (McComb), George (Bates) has been up and there’s a couple of younger lads as well that I’ve got a few spars with, it’s just good to be kept sharp.  You have to fight the best to be up there with them. Me and Sean were both unlucky this year in the seniors, we’ve been up there in the last few weeks sparring each other and bringing each other on, it works good for both of us,” he said.

Cully shouldn’t have too many problems in making the 60kg weight but was paying strict attention to his diet during his last week before departing for Bulgaria.

“I was only told last Monday week that I was going so getting the weight down will be a bit of a hassle. I haven’t really been watching the diet since the seniors. I’ve boxed at 60kg at senior for two years but in the first I was only after moving up from 56kg, I wasn’t really built into it but I’m comfortable at it now, I only really need to lose 2-3kg so it’s not too bad,” he said.

All his attentions for the moment are on bringing a medal back from Bulgaria but Cully also has a fight lined up in Pittsburg, America during St Patrick’s weekend.

Although David Oliver Joyce remains in pole position to go to this year’s Olympics in Cully’s weight, being around so many fighters preparing to box at the highest amateur level has only further whetted his appetite to one day represent Ireland at the Olympics.

“My aim is a gold medal at Tokyo 2020, that’s my main aim but I’m going to stay ready. I’m only young but I’m up training in Dublin and I’m ready. Sometimes there’s injuries, hopefully not, I hope Davey qualifies and does well out there but if something happens, I’ll be ready to take his spot.”