Huge weekend of sport coming up

IT’S a huge weekend of sport in Kildare across many different codes and there are some teams hoping to land some very significant pieces of silverware, while others will be looking to take a big leap towards doing so.

On the GAA front, Bryan Murphy’s under 21 footballers take on Dublin in the Leinster final in Navan at 2pm on Saturday afternoon. It’s a repeat of last year’s final between the two most successful counties in the province at the this grade, Dublin have won 12 titles while Kildare have lifted the trophy on 10 occasions. Murphy has named a team for the final that shows one change from the starting 15 that beat Westmeath in the semi-finals, Mark Sherry replaces Con Kavanagh, and if the impressive full forward line of Neil Flynn, Ben McCormack and Chris Healy can sparkle again there is every chance of a Kildare win. 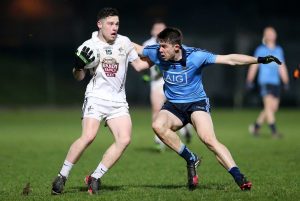 Chris Healy in action in last year’s Leinster Under 21 Leinster Final defeat against Dublin. He will be a key figure as Bryan Murphy’s men try to reverse that result in this year’s decider in Navan on Saturday
Photo: ©INPHO/Ryan Byrne

Cian O’Neill’s senior footballers have little to play for in terms of league points when Clare arrive in St Conleths Park on Sunday for a 2pm throw in but with a league final three weeks away, the manager has stressed that he still sees this as a very important game. That is backed up by the strong team that O’Neill has picked. It includes the return of Hugh McGrillen and Rob Kelly to the Kildare side and sees Tommy Moolick once again partner Kevin Feely in midfield.

On the ladies front, Alan Barry’s side take on Donegal in Round Towers GAA club on Sunday at 2pm. The team have picked up just one win in five games and will be up against it against a Donegal side who have taken the maximum amount of points over the same amount of games, but Kildare have had four weeks since their last game against Sligo to prepare for this match.

The young Lilly ladies also have a big game this weekend. After beating Meath on consecutive weekends, the Kildare ladies minor team play Dublin on Saturday in Clane at 2pm in the Leinster semi-final.

Away from the pitches, Kildare camogie are hosting a race night on Saturday in Naas GAA. A great night is in store with a host of local sporting personalities involved.

On the soccer front, the KDFL season gets underway this weekend with a full schedule of games down for decision across the five divisions. There is no doubting the game of the weekend when the top two teams in last year’s Senior Division meet when Naas Utd host Liffey Celtic on Sunday at 2pm in the Sports Centre on Caragh Road. 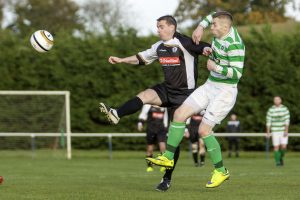 Liffey Celtic and Naas Utd proved to be the two best teams in the KDFL last season, sharing the Senior Division league title and Lumsden Cup between them, and they meet on the first weekend of the new season
Photo: Piotr Kwasnik

There are also a couple of significant cup matches. On Friday evening, Paul Perth’s Newbridge Town play Lucan Utd in Station Road at 8pm in the George Moore Cup semi-final. The two sides drew earlier in the season when they played in the league but Newbridge’s league form, they remain unbeaten in the league, and home advantage means they will start the game as favourites.

Then on Sunday, Mill Celtic travel to Dublin to play Kilmore Celtic in the quarter-final of the Leinster Junior Shield at 1pm.

In rugby, one of the biggest games in Kildare in recent times will be played in Forenaughts on Saturday afternoon when Naas take on Skerries at 2.30pm. Eight wins in a row since the turn of the year have sent Naas three points clear of Banbridge going into the final game of the regular season. If they can extend that winning run to nine games on Saturday they will clinch the UBL Division 2A league title and be promoted to the second highest division in the All-Ireland league for next season. That would be the highest level of rugby that any Kildare side has played at so it would be a huge achievement for the club. 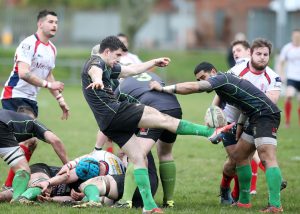 Peter Osbourne’s superb recent form has helped lead to Naas to within one win of lifting the UBL Division 2A league title
Photo: ©INPHO/Presseye/Jonathan Porter

The Kildare Nationalist will have reports and photographs from all these games in Tuesday’s paper.

Let us your thoughts on any of the sporting action around Kildare on our Twitter page, @KildareNatSport.