THIS Sunday will be another huge day in the blossoming career of 20-year-old out-half Joey Carbery, as he prepares for his first-ever game at the Aviva Stadium.

The Athy man (who moved to the south Kildare town from New Zealand in his early teens) graced the fields of the nearby RDS for Blackrock College in their successful Leinster Schools’ Senior Cup triumph in 2014, and he will a key figure for Clontarf when they face Cork Constitution in the Ulster Bank League Division 1A decider at Leinster HQ.

Speaking at a launch in the Aviva’s IRFU Suite yesterday, Carbery revealed that the prospect of finally playing in the Ballsbridge venue is an exciting one. 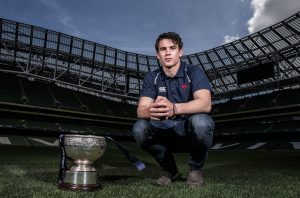 However, he is nevertheless aware that they will be facing tough opponents in the shape of Cork Con, who secured a fourth consecutive Bateman Cup success over Galwegians last Saturday.

“I’ve never played on the pitch before, but I’ve trained here with the Ireland U20s a few times. It’s a really, really nice pitch and it’s always a good way to end the season, with a chance of silverware,” Carbery remarked.

“They [Con] were good. I saw the highlights of it [Galwegians game], and they look very strong. But we’ve done our work anyway, and a lot of preparation over this season. Hopefully we’ll just stick to our game, and hopefully it works out.”

It has proven to be a very productive season overall for Carbery, and in addition to the regular game-time that he has accumulated between Clontarf and Leinster ‘A’, he also made his competitive first-team bow for the Blues as a late replacement against Glasgow Warriors in March.

As a result, Carbery’s schedule has been rather hectic at times, but he explained that both Leinster and Clontarf are helpful when he comes to ensuring that his workload is always manageable.

“Leinster are really helpful with stuff like that. They always manage your times, and make sure you’re training enough, or if you need a rest every now and again, they’ll give it to you.”

With Ian Madigan departing for Bordeaux when Leinster’s current campaign draws to a close, there may well be opportunities next season for youthful fly-halves like Carbery, Ross Byrne and the increasingly-prominent Cathal Marsh.

Carbery is hopeful that he can make a more significant impact with the first-team in Leo Cullen’s second campaign at the helm, especially as he has been training on a regular basis with the senior squad in recent months.

“I’ve just got to keep working hard and I had a few chances this year, and I’ve felt I’ve done well. Hopefully next year I get more of a chance, and can try and push on a bit more.”

“I’ve been in with them [first-team] since Christmas a good bit, with [Johnny] Sexton and Mads [Ian Madigan] being involved with the Six Nations and stuff. There’s only been three or four 10s in the squad, so most days I would be with them.”

Although he has now moved on from his local underage club, Athy RFC are still very close to Carbery’s heart. He was coached by his father during his time with The Showgrounds outfit, but although he acknowledged that there would be elements of the Kiwi style that he would incorporate into his coaching drills, he feels Carbery Sr has always been able to adapt in the way that is required.

“It is a great club. To have my Dad coaching and playing with my mates week-in, week-out was really fun. It really made me love it, going to school with them. It was a good way to develop.”

“He [his father] coaches as he would see it, his instinct as well. He probably would have a bit of a Kiwi way about attack and defence. He definitely notices systems that need to be changed.”

However, Carbery is also working under a New Zealand coach with Clontarf, as Andy Wood is currently at the helm in Castle Avenue. The former Ireland U20s star is hugely impressed by Wood’s coaching style, and also praised the man-management of the Wellington man – who previously had a spell as head coach of Naas RFC.

“I really, really like Andy’s coaching style. He’s a really good guy as well, he’s a friend as well as a coach. Off the pitch, you can chat to him about anything and then on the pitch he’s always very positive. He’s always going to have you best interest at heart.”

“Sometimes in a tough game, or a close game, he likes territory. If you run it from your own 22, he is like, ‘don’t do that’. I like to play what’s in front of me. If it’s on, it’s on, especially in Clontarf where we’ve got great backs like Mick [McGrath] and Mike Brown.” 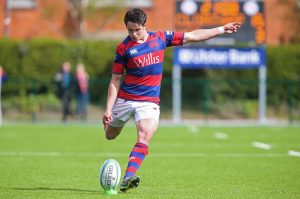 From the point of view of Wood – who is in his fifth season with Clontarf – he recognises that Carbery has enormous ability, and although he is keen to offer a strong environment for up-and-coming Academy players, he understands that he may not see much of Carbery beyond this season.

“Joey is quite clearly a super talent. For us he’s shown a wide range of skills which have been well noticed at Leinster and their Academy.” Wood stated.

“I’d say he’s got a big, big future, I certainly wish him well because I don’t know how much we’ll see him after this season to be honest. From where we come from, what we would offer to guys like Joey is a good environment, a brand of rugby that would suit them.”

“They get a chance to showcase what they have in a pretty physical environment. They learn as they go along and they show what they’ve learned in the [Leinster] A games, and any opportunities they’ve earned up with Leinster and beyond.”