THERE are many boxers who would gladly settle for the kind of amateur career that Eric Donovan enjoyed. Five senior Irish titles from bantamweight through to lightweight, a Four Nations Gold, European Bronze and a bronze at the 2010 European Championships would satisfy most but fighters fight and now, a month short of his 31st birthday, Donovan is ready to take on one of his biggest challenges by turning professional. 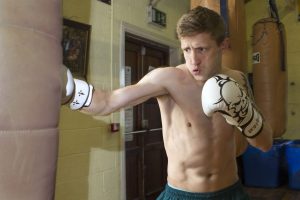 Athy BC’s Eric Donovan is in good shape ahead of his professional debut on Saturday
Photo: Piotr Kwasnik

Even after all that he has achieved, Donovan wants more and is ready to take the Irish professional scene by storm with his debut this Saturday night (25 June) in the National Stadium.

“I’m not just going in here to throw my hat in the ring to check out professional boxing. I know it’s a tough, tough business. There are guys in there that are really tough guys and I’m going to face some big uphill battles but that’s something that I want to be remembered for as well. Some of my best nights have been in the National Stadium, I’m so proud to have my debut there, but I want to create a big buzz, just like Carl Frampton did with the Northern Irish crowd. I want to do the same here. I know the Kildare people are great supporters of their own and I just want them to get behind me. My goal is a European title and I won’t stop until I get to that goal and I think the more people I have with me sharing that experience with me the better,” said Donovan.

Coming into the fight, Donovan has painstakingly prepared for the action and now with a great experience and knowledge of his body, he feels he is more ready than ever to step through the ropes.

“I know it’s a cliché and people will always say that I’m in the best shape of my life but in terms of nutrition and the physical side of it, I’ve really prepared meticulously for that. I’ve never really took on board the sound advice that I’ve been given over the years, maybe there was an ignorance to me, I’ve done things my own way. Now, I’ve been working with a lady called Jess Day, she’s a holistic nutritionist. She is amazing, she has worked with the runner Tyson Gay previously as well. We’ve cut down in the last month by body fat by five percent, that’s huge. I think that if I can continue to work with her it will make things a lot easier for me,” said Donovan.

“I haven’t put on one sweatsuit yet. During my amateur career I would have been training in a sweatsuit almost on a daily basis. It’s true what they say, six packs are made in the kitchen. I’ve been eating clean, cutting out the crap and it’s great feeling,” he added. 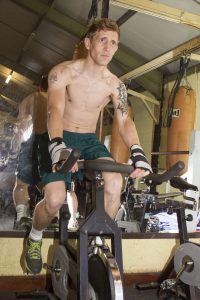 Eric Donovan has put the work in and is ready to put on a show in the National Stadium this Saturday night
Photo: Piotr Kwasnik

Some have queried why Donovan would want to turn professional at this stage of his life but he feels that everything he has experienced so far in his life make this the perfect time to go pro.

“It’s all about experience. Some people have said that I’m a bit too seasoned for this or that I should have done this years ago. That’s all negative stuff, I don’t buy into any of that at all. I’m not going into my pro career thinking I should have done this years ago, everything happens for a reason. I’m going now because it’s the right time for me to go, I’m ready. I’m going now because I’m ready to listen and to put in the work. I don’t think I would have been ready to do that three or four years ago. Everything is right and everything is perfect right now.”

“The experience I have now, especially after fighting in the WSB. I lived in Kazakhstan for eight months. That was a huge benefit for me, I learned a lot out there. I felt I developed a lot out there, as a man as well as a boxer. I went back into third level education in 2012 as well. All this little things outside boxing helped me to build into a more mature man and to make sound decisions for myself. Everything about my professional career is perfect now, I couldn’t be in a better position right now in my life,” said Donovan.

Going in as a professional, Donovan knows that he will have to adjust his game in order to succeed. Already, he has been working with his coach Dom O’Rourke in order to generate more power behind his punches. 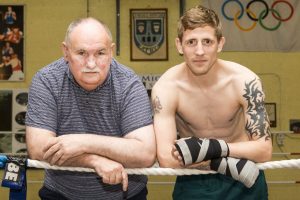 As always, Dom O’Rourke will be the man in Eric Donovan’s corner
Photo: Piotr Kwasnik

“The objective still in the boxing ring is to hit and not be hit. I have a lot of qualities that I would have learned throughout my amateur career. Those qualities are my hand speed, my foot work and my counter punching skills. It’s important not to lose those skills because they can get you out of trouble in the ring and can win fights for you. Also, it’s important to make additions to what I already have. Maybe I need to sit down a bit more on my punches and try to land a bit more power rather than punch and be gone before it even lands. That’s the way it is in the amateur game, it’s about points, in the professional game it’s about landing the heavy blows and really effecting your opponent when you hit him. We’ve been working on that and I have been generating an awful lot of power over the last few weeks. Dom has noticed a huge difference in my power punches and I think that is because my thought pattern has changed, now I’m trying to land a punch and committing to it, driving it right through. It’s about being more committed to your shots rather than trying to land and get out as quick as possible,” he said.

He has been working on his mental focus too in order to ensure he is ready.

“The mind can be a very fragile thing at times. People can say its mind over matter but sometimes you can dwell on negative things, dwell on things that don’t go well, and you can also dwell on glory days. I know there is the negative side of the mind and there is the positive and you can spend time dwelling on both but I’m just trying to focus on the present time. I’m trying to focus on what I can do today, what I can do in the next session, not to worry about the past, even though the past can be a help. I want to focus on what I can control and that’s what I can do today. What I have noticed is that after every session I feel a little bit stronger and the mind feels more positive than it did before. It’s only small little margins but they are all adding up and accumulating to something very special and very strong,” said Donovan.

After a recent online competition, Donovan decided on the nickname of ‘Lilywhite Lightning’ for his pro career but a much more important decision was on his coaching team. Not that there was ever really a decision to be made. Dom O’Rourke has been the made in Donovan’s corner since the start of his amateur days and he was the only one that Donovan wanted alongside him as he embarks on this new journey.

“Dom has been with me since the very start, inside and outside the ring. It’s important to have him there because I trust him and I know he has my best interests at heart. This professional game can be very insecure so it’s important that I build a team around me that has the same vision as me and that I can trust. Dom is number one on that list. I know his experience of the professional is probably the same as mine, non existent,because we’ve spent so much of our lives as amateurs. But we know boxing and we know what to do, and we know how to work together and learn. It’s going to be a journey for both of us and it’s going to be an exciting one as well. Dom is a pillar of support in my life and has been from the start so to lose him for this journey would be a big loss to me so I’m delighted that he is going to share this experience with me,” said Donovan.

The fighter plans to compete in Hell and Back the morning after the fight with as many as 50 clients from around the county from his popular boxercise and fitness classes but it’s Donovan who hopes to send opponent Damian Lawniczak to hell and back on his first steps towards what he hopes will as successful a professional career as he enjoyed in the amateur ranks.