AMONG the plethora of photographs on social media following Kildare ladies’ fantastic one point win over Clare in the All-Ireland Intermediate Final in Croke Park, two pictures side by side stood above all others. 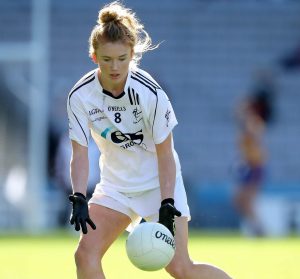 Erica Burke played on for Kildare in their All-Ireland Intermediate final win despite fracturing a bone in her right ankle as early as early as the third minute
Photo: ©INPHO/Ryan Byrne

In one picture, taken in 2004, a nine year old Erica Burke is shown looking star struck beside her idol Aisling Holton following Kildare’s All-Ireland Junior final win. The picture beside it was taken after last week’s game, Burke and Holton by now midfield partners on an All-Ireland winning team.

“I couldn’t believe it myself, just to be on the same team as Ais was a big thing for me,” said Burke, now 21.

“When I was younger if anybody asked me who was my footballing idol I would always say Ais because was just, and still is, just the most amazing footballer. She is just unbelievable. I started playing senior football for my club Balyna when I was 12, I played in goals and since then she has been a very big influence on me,” she added. 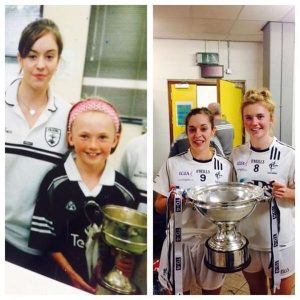 Left: Erica Burke meets Aisling Holton after Kildare’s All-Ireland Junior final win in 2004
Right: By 2016, Burke is Holton’s midfield partner as Kildare again get their hands on silverare at Croke Park, this time in the All-Ireland Intermediate final

“Dreams come true” said the post on her Facebook page with those pictures but when Burke was a star struck youngster hoping to emulate Holton by playing in a winning Kildare team at Croke Park she could never have imagined the lengths she would have to go to.

Just three minutes into her All-Ireland final dream things took a nightmarish turn. Charging her way into the Clare 45, Burke tried to change direction but as she did so, her right ankle gave way beneath her on the hallowed Croke Park turf.  It would be later revealed that she had suffered an avulsion fracture, which basically means that a ligament attached to the bone had actually torn away a piece of the bone in her ankle. She had also suffered ligament damage.

At the time of the incident, she didn’t know the full extent of the injury but she knew that there was a real possibility that her final could be over before it had really began.

“I was passing off the ball and my ankle just twisted. I’ve a history of ankles injuries, I’ve done in both ankles before. I knew straight away that it was bad, it was so, so painful. I thought I was going to have to come off, I was just thinking ‘please don’t let this be happening’ because it was so early in the game,” said Burke.

Physio Melissa Parker was able to help her to her feet and rather than give up on her dream, Burke gritted her teeth and played through the pain.

“For the first few minutes after it I did feel like I was labouring on it. Thank God I was just able to put it to the back of my mind and I was able to run a bit better as the half went on. At half time I got some strapping and I felt more at ease then in the second half, I completely forgot about it. By the end of the match I looked down and it was so swollen and was very bruised,” said Burke.

Victory brought about its own problem but just as Burke got through the pain during the game, she did the same in order to wear an essential piece of equipment for Sunday night’s celebrations.

“On Sunday night, I just about squeezed into my high heels, the only other option I had were runners and they weren’t going to go with the white dress. The heels were a bit of a struggle I must admit,” laughed.

Burke got through the Monday before finally getting her ankle looked after on the Tuesday.

“The season is over now anyway so it’s not too bad,” she said.

Looking back at her bravery to play on and try and help the team, Burke is very modest about her actions and said that Mary Hulgraine playing through something similar in the Leinster final had helped build that sort of spirit within the team.

“I didn’t think about it at all really and it was only when people starting asking me did I really play on with that injury that I began to think it was a bit mad. I think anybody else in my position would have done the same thing. We have just worked so ridiculously hard. Everything led to that day and for everything to come crumbling down in the first few minutes would have been devastating,” said Burke.

“Mary played with a broken foot in the Leinster Final. When you have girls like that around you, you end up taking that sort of leadership on yourself and you just carry on,” she said.

The days following the win were like a dream as the team got to visit various clubs and schools around the county, and a visit to her old school in Broadford particularly stands out for Burke.

“I’ll literally never forget it for as long as I live and I don’t know if I’ll ever experience anything with the emotion of it all again. Especially going back to Broadford school, that was absolutely the highlight. They won the competition for the best decorations so the team went to visit them. My Mam works there, Maria (Moolick) teaches there as well so it was brilliant, the kids were over the moon,” she said.

Among the pictures that the Broadford school have gathered and put on the wall to celebrate the team’s win are those pictures of Burke and Holton, one picture of a awe struck youngster with her idol, the other of a formidable All-Ireland winning midfield partnership.

“Dreams can come true” says the poster. There is no doubt Burke’s performances and tales of her bravery will inspire kids within that school, and beyond, for many years to come.

From Junior to Senior, Holton grew into a Kildare star

BURKE RETURNS TO KILDARE LINE UP