Sarsfields’ marathon man back in the football fold

“Conor Tiernan, with no exception, is the fastest and the fittest Gaelic footballer in Kildare. If he stood into the county panel now, there isn’t anything to live with him.”

***
ZERO-five-thirty. It’s dark, it’s cold and it’s quiet. And if Harry woke just now, he might think there was a burglar in the house. What else could explain the rustling at the back door?
By the time Harry wipes the sleep from his eyes, his dad is washing the sweat from his back. Outside, daylight has not yet appeared and in the spotlights cast by streetlamps lie the lonesome steps of Conor Tiernan. He is alone on this journey but the solitary confinement does not make him a recluse. He enjoys it too much to feel lonely.
“I just love pushing myself to see how hard I can go,” says Tiernan.
“You know that feeling when you’re training and you just think you can’t go any further?” he offers by way of explanation. “And then you go further. I love that.”
Admittedly, he finds it strange, adding: “A lot of lads don’t understand it.” 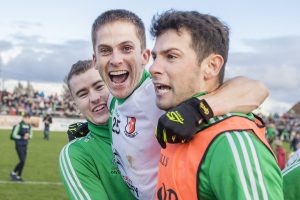 Tiernan leads the celebrations after his half time introduction helped turn this year’s county final against Moorefield in Sarsfields’ favour
Photo: Piotr Kwasnik

The physical training is supposed to be a kind of sacrifice for footballers. They endure the torture in exchange for the uncertain rewards of championship football. It’s a gamble, a game for thrill-seekers.
For Tiernan, the thrill always came from training.
“I knew from a number of years ago that football wasn’t the big thing for me anymore, I was losing interest in it and then I didn’t know what to do,” he admits.
Wrestling with those thoughts is not easy when you’re a key player for a team like Sarsfields. Tiernan had been immersed in the club from a young age and broke into the senior squad while still a minor in 2005. With his electric pace and dynamism – he began life as a forward before securing the number five jersey – it did not take him long to become a permanent fixture of the starting 15.
In 2012, he served as vice-captain, netting a penalty in the county final against Carbury as Sarsfields won their first championship in seven years. He was the obvious candidate for captaincy the following season.
“In 2012 I was still all mad football,” he says. “When I went to the Leb after 2013, I was on my own and training so much. I could run as much as I wanted. When I came back in 2015, I didn’t have the same love for football. I wanted something different. Not having football for six months didn’t really bother me.”
Defeat to arch rivals Moorefield in the 2013 county final left a bitter taste and as losing captain, Tiernan was determined to make amends. Then life intervened.
Having started out as a carpenter, the recession forced a rethink. In 2011, Tiernan joined the Defence Forces and when recruit training commenced, he had to withdraw from Kieran McGeeney’s Kildare panel. Three years later he was back in the Kildare fold, with Jason Ryan at the helm. By now he was also a father and the chance to do a tour of duty overseas was too good an opportunity to turn down. Family had to come before football.
The summer of 2014 was the beginning of a new dawn. Hot, humid nights in Lebanon made it hard to sleep. He’d lace up for a late-night run, hoping the exertion would induce slumber. The constant release of endorphins fuelled a developing addiction.
What began as a homemade cure for mild insomnia has turned into an all-consuming passion.
“I could be lying in bed at night, it could be 11pm and I’ll think to myself: ‘I didn’t do enough today.’ So I’ll get out of the bed, put on my training gear and go for a run, come back, have a shower, then go to sleep,” says Tiernan of a typical day in the winter of 2016.
This time last year he made his move away from football. Sarsfields had just been beaten in the Leinster club championship by Portlaoise.
“Football was just dying for me,” Tiernan recalls. “I was after playing for Sarsfields for so long. Everyone thought I wouldn’t leave. I remember telling Crofton after the Portlaoise game last year: ‘I’m finished now.’ He didn’t believe me.”
While John Crofton began planning for 2016, Tiernan turned to triathlon. Former clubmate, Michael Browne, introduced him to the sport. Tiernan took to it quickly.
“After playing football for so long, having everything on my own shoulders, it’s all on me, whatever I put in I get out of it,” he says, describing the lure of an individual sport like triathlon. “For years I was putting in so much to football but then sometimes you wouldn’t get as much out of it. This year I’ve won more medals and trophies than I’ve won nearly the whole way in football.” 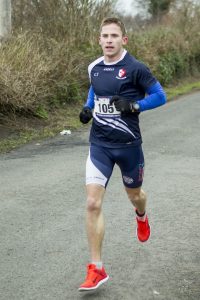 Tiernan is just as happy competing in triathlons as he is on the football pitch.
Photo: Piotr Kwasnik

For a man who can break 16 minutes for a 5k and 34 minutes for a 10k, running was never going to be a problem when it came to triathlon. The facilities at work – he’s currently based at Curragh Camp – give him plenty of scope to swim and cycle.
Even if he didn’t, Tiernan is the type of guy who’ll find a way to do things.
“YouTube is brilliant for swimming,” he says without being glib. A turbo trainer for his roadbike can be set it up in the sitting room.
“I’d be sweating buckets,” he says. “I’d be watching telly. I could be in here for two hours and I wouldn’t even know how long it was.”
While training consumed him, Sarsfields were on the brink of a fifth successive county final appearance. On the day that they beat Athy in the quarter-finals, Tiernan was doing a triathlon race. He was only in the door when John Crofton called.
“I got the phone call 15 minutes after I came in, saying Cian McConnell had done his shoulder,” says Tiernan recounting the conversation. “I know training with football is stopping me doing my own training. It is killing me. I promised Crofton and when I do say I’m going to do it, I’ll do it.”
That’s how Tiernan found himself back in a Sarsfields jersey for the semi-final win against Confey, coming on as a second half substitute. It was still unclear whether he would figure in the final against Moorefield. Despite his commitment to Crofton, Tiernan had some reservations.
“I took a bit of a risk going back,” he reckons. “Going back in for a county final, if that didn’t work out the whole of Sarsfields would have said: ‘What the hell are you doing bringing him on?’ And that would have ruined my career. My father didn’t even go to the game because he was afraid it would have ended in tears.”
With Sarsfields trailing at half-time, Tiernan was sprung from the bench. He scored the equaliser within seconds of his introduction and ended the game with three points. After losing four times to Moorefield in the final, Tiernan finally got to taste a victory against them.
“I’m so glad that I came on against Moorefield and did well because even if I do leave now, it’s a better note to leave on,” he says.
With Sarsfields chasing their first Leinster title, there could be more to come for Tiernan. While he continues to do as much triathlon training as he can, he’s also committed for the club’s provincial campaign.
“That Moorefield game kick-started a bit of appetite for me again,” he reveals.
The competitive instinct is something he cannot resist.