WHEN the Ireland womens rugby team run out at Broadwood Stadium this evening to begin their Six Nations campaign against Scotland, it will be the end of one of the most frustrating periods of Jenny Murphy’s sporting career.

The Kilcullen girl is not one for sitting still. She always wants to be active, wants to be involved, so to be kept of out rugby action for over 14 months is just about as bad as it gets for her.

To make it worse, it was a back injury that meant long spells of resting before the slow process of working her back towards full fitness. Even then, Murphy had to take it so slowly so as to not suffer a recurrence but her inclusion in starting XV this evening is confirmation that she is finally back.

It’s been a long road back but after missing 14 months through injury Jenny Murphy is ready to represent her country once again
Photo: ©INPHO/James Crombie

It was just such a struggle,” said the 27 year old, as she looks back on her time out.

“I don’t like sitting on the sidelines and to have to miss even one session, so to have to do that for months on end was tough. I definitely have more empathy for those people who have to go through a few of those long term injuries throughout their careers. Touch wood, I won’t have to go through anything like that again because it’s not nice but it’s done and dusted now and I’m just delighted to be able to play rugby again. I’m really happy to be back in the mix for the Six Nations, if you had asked me that a year ago I wouldn’t have been so sure or confident of getting back in,” she said.

Rather than being the result of one collision, Murphy’s back injury built up over time.

“It wasn’t one tackle or one hit. I was going to the gym and struggling the next day, I didn’t think too much of it at first but it wasn’t getting better. I went for all the check ups and found out that it was bit more serious than I first thought. I had a double fracture of facets in the lower part of my back. I did it on both sides of my back at different times and it just took a lot longer to get sorted than initially thought.

“Rehab was light enough at the start. It was no running, no gym, nothing like that, just rest. I was just able to do some types of upper body stuff but I was very limited. A couple of months later I was jogging and if I pushed it too much it would be one step forward, two steps back so it was just baby, baby steps for a while. I got through it though and I’m just delighted that it is over and done with and that I am back on a pitch with the girls, it’s just great.

“I was with the Irish medical team all the way through the rehab. The likes of Joe Montgomery was one of the phyios, Liam Heavin out in UCD and Emma Galvin as well. There were a few people involved, then there was the S&C stuff as well to get me back fit. I’m seeing physios less and less which I’m delighted about and I’m seeing the S&C coaches more and more which I’m not so happy about but it has to be done, it’s a different sort of pain,” laughed Murphy, but it was no laughing matter during her 14 months on the sidelines and there were times that she had genuine fears for her sporting career.

“I remember going to the doctor about seven months into the injury, I think I had a chest infection at the time. He probably didn’t think much of it but he asked me did I think I would play again and that I’d have to seriously consider the possibility that I might not. Looking back now, I should have known that he didn’t have all my records and the people like the physios and surgeons that I was working with never said anything like that to me but still hearing that was a bit of a shock. So it did cross my mind a bit but I was lucky to have great support around me and the girls were amazing. When I did get down in the dumps, because once in a while I’d be feeling sorry for myself, they’d give me a swift kick up the ass and get me going again. That was a motivation that I needed because at times it was hard to motive myself individually but the girls were there when I needed them to give me a hand,” she said.

Murphy finally made her long awaited return to action towards the end of last October for her club, Old Belvedere, and even though they lost, it was game that she will remember for a long time to come.

“I was really nervous going into it. It was against UL Bohs, who have some internationals on the team, so it was going to be a tough game anyway. I was on limited time, I was only allowed to play 15 or 20 minutes. Relief was the big feeling after that.

“Two minutes into the game I made my first tackle and it felt good. I didn’t really have time to think about it then after that. It was only when the game was over that I thought about getting through it ok and I was beaming from ear to ear. I was just looking forward to going and playing again but after that first game, even though we lost, it was just resounding relief, I was just thinking ‘I’m ok to play again’,” she said.

After coming through that, Murphy played for Leinster in the Interprovincials in December. That was basically a fitness test  to see if she would be up to the pace of the international rugby again but even though manager Tom Tierney and his staff were carefully watching Murphy’s performances, she put that out of her mind to concentrate on the job at hand.

“I think if you’re playing in the Interpros and playing well you are in with a shot of getting called up for caps. The Autumn internationals were going on at the time and obviously I was ruled out for those so I was just focused on how I was playing and trying to have a good Interpros. For people who weren’t involved in the internationals, that was the chance for the coaches to see you. I just wanted to get through the games and not worry about what Tom might have been thinking. It was just a smaller focus for me and it worked out alright in the end,” said Murphy. 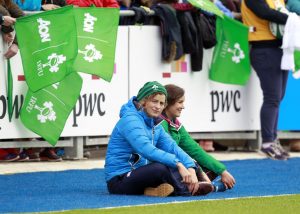 Murphy had to six out the Six Nations last year, like in this game against Italy, but she is ready to make her mark again now
Photo: ©INPHO/Colm O’Neill

The time on the sidelines has given Murphy plenty of time to think about her game and as one of the most experienced players now in the squad, she is looking to become a more rounded player.

“I’m still aiming to make those big hits, I still want to be a good liner. Physicality wise, I’m not going to change, if anything I want to bring even more that to my game. I do want to be stronger in contact, I do want to be very aggressive with or without the ball. It’s just about adding to that, better decision making and more of a playmaker as well. I want to have more facets to my game than just a strong ball carrier that’s able to make some big hits and then. I want consistency across the board as well as being that physical player on the park,” she said.

Her inclusion in the Irish squad means that there will be two former CPC Kilcullen students are in the squad with Aine Donnelly, who has had her own injury problems, also picked by Tierney,although Donnelly hasn’t been named in the match day squad.

“There was no rugby when we were in the school. Basketball, rugby and soccer were the main sports and it was great to even has those as a choice. I have a lot of time for that school, I had a great time there. The teachers were great and very encouraging about sport. They gave up a lot of their time to take us out for different sessions. It’s great to see the name of the school in the match programmes and hopefully it will encourage more girls to take up rugby, not just in CPC but all around Kildare, the talent is definitely there,” she said.

And there is plenty of talent in the Irish squad presently too. Murphy, as always, is aiming for the very top.

“We want to win the Six Nations. We’re not taking Scotland lightly, that’s the first game so that is what we are looking at now. Our aim is to win it, that’s the way it has been for the last number of years. We want to get a good platform building into a World Cup year and we want to put our mark down early,” she said.

While that will to win to win burns as brightly as ever, Murphy will surely also take time to be thankful for just being back available for selection.