AN 8 year old student from Scoil Naomh Padraig in the Curragh will represent Ireland at the upcoming Milerose Games in New York. 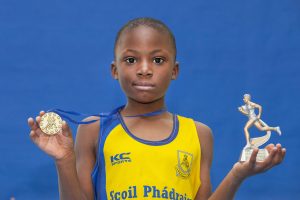 Young athlete Bernard Ibirogba of Scoil Naomh Phradaig in the Curragh prior his trip to New York.
Photo : Piotr Kwasnik.

The Games are a professional meet, will be screened live in America, and are best known for Wanamaker Mile which has been won on multiple occasions by Irish stars Eamonn Coghlan, Ronnie Delaney and Marcus O’Sullivan.

Bernard Ibirogba, along with an 8 year old girl from Donegal, will the be Irish representatives after coming through a qualification process that involved over 8,000 children.

“The competition is called the Fastest Feet. 8,000 children from all over Ireland enter it and they narrow it down to 24 finalists. Bernard qualified though the Clane trials. He went to the finals in Athlone, made it through the semi-final as the fastest qualifier and then obviously went on and won the final,” said Bernard’s coach, and a teacher at the school, Seán Connolly.

“There’s one boy and one girl put forward for the trip and they have to be 8 years old on the day of the race so he is considered the fastest 8 year old in Ireland now,” added teacher. 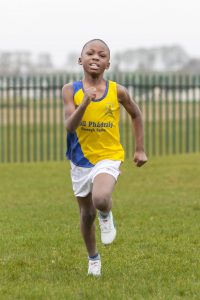 Bernard is one of two Irish representatives  who qualified from over 8,000 entrants
Photo : Piotr Kwasnik.

The win was even more remarkable considering that the only running that Bernard does is within his school, not like many of his opponents who would have been affiliated to clubs around the country.

“The trials in Clane were all run over 20 metres, the same as all the qualifying races. The finals in Athlone though were over 50 metres and I think that suited Bernard better. We knew he had a chance but it was down to how he would perform on the day and in the end, he did great. Particularly as he was up against club runners, Bernard doesn’t run for a club, he is just a member of the school running team. He does it twice a week in the school. That was his first time actually running on a tarten track,” said Connolly.

Bernard’s teacher Connolly will accompany Bernard’s parents when they leave for New York this Thursday with the race scheduled for Saturday but he is no ordinary teacher. He was the 2011 Irish marathon champion and came within two minutes of achieving the ‘A’ standard qualifying time for the 2012 Olympics. In 2011, he also came within .15 seconds of breaking the four minute barrier for the mile and with the natural resource of the Curragh plains on the school’s doorstep, he has been able to pass along his expertise to a new generation of runners.

“The cross country is a big thing for these guys and  in the past few years we’ve had a good bit of success in the school. The lads in the cross country have helped push him and they are all buzzing for Bernard too.

“There is a whole community spirit within the school. We have four teachers and about 30 kids who every Thursday go out into the Curragh Plains to run. You wouldn’t get that in many schools. We have this natural resource on our doorstep and the staff are involved too. A lot of people celebrated Bernard’s success but the whole school feels involved in it,” said Connolly.

As a quirk of fate, Connolly regularly trained at the Armory, where the Millrose Games are held, during six years spent in the USA and he is says the event will be a great experience for Bernard.

“He’s up against eight other runners. There will be a big crowd at it. Traditionally it was run at Madison Square Garden but budgets were cut a few years ago so it’s been moved to The Armory. It is still a huge meet, so far there are 12 Olympic gold medallists scheduled to compete. It’s a professional meet but they have a couple of high school races, couple of university races and one kids race. It will be televised live on American television so it will be a great experience for him,” said Connolly.

School principal Jonathan Healy said it a proud achievement for the school and is a testament to the school running club which Mr. Connolly leads. 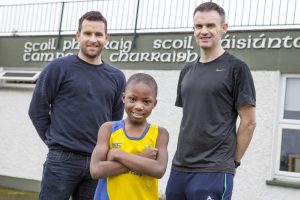 “When you have nearly 90 young fellas their energy is a huge thing to keep under range and it’s great to have Mr. Connolly here and the expertise that he brings, a national marathon champion and a storied career. It’s great to have his expertise to give back to the kids and every Thursday we are out on the Curragh Plains with 20 or 30 boys who are just improving their fitness,” said Healy.

The school have got beyond Bernard to help financially and the Defence Forces have also helped by letting Bernard train on their athletics track.

“We had a civvies day for Bernard and raised some money and we donated some money ourselves. Our school lunch sponsors Bradburys have also made a generous donation to Bernard’s family for the upcoming trip,” said Healy.