ST Laurences, and in particular Shaun Fahey, made a flying start to the new league season when they recorded a fine win at the home of county champions Sarsfields. 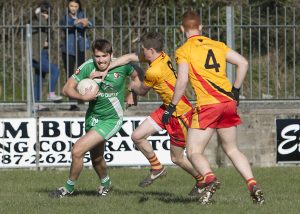 The centre half forward grabbed four goals, two in each half, to put his team in a great position but it was a late goal from Steve Mann, on his league debut for the club, that secured the win.

Fahey’s ninth minute goal helped Laurences a 1-2 to 0-1 lead but Sarsfields scored the next 1-4 in the game, the goal coming from Dan Nea in the 12th minute.

Mark Glynn then brilliantly set up Fahey’s second goal in the 20th to level the scores, and there was still no separating the teams at the half time break, 1-6 to 2-3.

Barry Coffey and Tommy O’Neill swapped scores early in the second half before the home team scored four points in a row to pull clear by the 42nd minute.

It looked like Laurences would need a goal to get back into the game, and Fahey duly obliged. He completed his hat trick from a penalty, in the 44th minute, after Mark Lawler had been fouled following a foray forward from corner back. 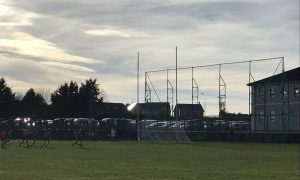 Fahey’s fourth followed in the 48th minute after Jack Lawlor teed him up once Josh Morgan had fumbled Stephen Murphy’s shot.

Less than a minute later, Coffey levelled up the scores.

Morgan redeemed himself for his earlier mistake with a superb save to deny Lawlor from close range, with Fahey this time attempting to turn provider.

Laurences went ahead with three minutes to go when Padraig O’Neill fisted over and they made sure of the win a minute later when back Mann shot home.