Alice Springs to make seasonal debut at Naas on Sunday

THREE-time Group 1 winner Alice Springs will begin her season at Naas on Sunday when lining up in the Group 3 Gladness Stakes under the world’s leading jockey, Ryan Moore, who will making just his second visit to Naas Racecourse. 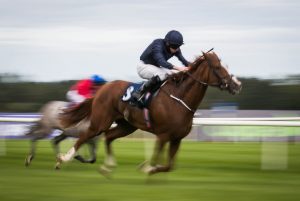 Aidan O’Brien’s star filly set a new course record at Newmarket when winning the Group 1 Falmouth Stakes last July and followed that up to win the Matron Stakes at Leopardstown on Irish Champions Weekend and then Sun Chariot Stakes back at Newmarket in October.

The daughter of Galileo will face four-rivals including Tom Hogan’s veteran Gordon Lord Byron, while Michael O’Callaghan is represented by Blue De Vega in the €60,000 contest.

Hogan said of his stable star; “He’s in good old form and I’d be hoping he will come on a bit for his run at Dundalk and if you are not in you can’t win but Alice Springs will obviously be very hard to beat. Hopefully the ground will dry out a bit and that will suit us.”

Fozzy Stack, who got his season off to a fine start at Naas last month, runs the highly regarded Diamond Fields, while Smash Williams completes an intriguing field for trainer Jim Bolger.

Also lining up in the 10-furlong contest is Ken Condon’s high class five-year-old Success Days who landed the Royal Whip Stakes at the Curragh last season.

Condon said; “Success Days is well and ready to start and the ground being soft, yielding in places should be fine for him. He’s in good heart and we are looking forward to a good campaign. He’s five now and has strengthened up well over the winter and we’ve had a good prep and run with things and hopefully he’s ready to run a nice race and we can look at coming back to Naas for Mooresbridge next month.”

Jim Bolger’s Stellar Mass also brings a high level of form to the race and the field is completed by Lustrous Light and Sea Swift.

The first race on Sunday is at 1.55. The Alleged Stakes has been named after The Maestro, Vincent O’Brien. It is fitting that the Centenary of Vincent’s birth sees the Alleged Stakes and the Gladness Stakes as twin features on Sunday. Racegoers will enjoy a commemorative racecard which tells the life of Vincent and a picture gallery within the racecard.

Ruby’s views on the return of racegoers in the UK, dangerous riding and his father, Ted’s recent success with Castletownshend