Huge boost for Kildare GAA with Brophy set to return

KILDARE GAA received a huge boost with the news that Paddy Brophy is to bring to an end his career with AFL side West Coast Eagles to return home to Ireland. 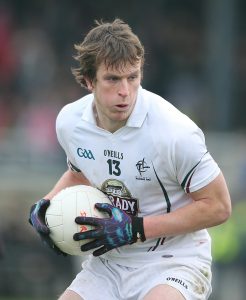 Paddy Brophy could be set to resume his Kildare career
Photo: ©INPHO/Lorraine O’Sullivan

The Australian club made the announcement on their website this morning, saying:

“Brophy, in his third year at the club, has decided to return to his home country where he will resume his Gaelic football career, with the aim of playing for County Kildare.”

“It’s disappointing that Paddy has decided to go back to Ireland, but he has been a valuable member of the playing squad.

“Paddy came to the club as our first international category B rookie and did very well to adjust to our game and the oval ball. He has always enthusiastically embraced the challenge of tackling a foreign game, but could not quite reach the level to play elite football.

“He did play regular senior football at East Perth and always gave himself the best chance of success. We thank Paddy for his contribution over the last three years and wish him every success with the next phase of his life.”

Brophy himself is quoted as saying:

“I am going home for personal reasons, including homesickness, but I have really enjoyed my time at the club.

“I will always be grateful to the club for giving me the opportunity. It has been a great experience, but I’ll go back home, continue my university studies and play Gaelic football.”

While it may be disappointing on a personal level for Brophy that his AFL dream is over, the news of the return of the 23 year old will be music to the ears of Kildare supporters. Big, strong, skillful, quick, he would appear to be the ideal modern footballer. Were he to be parachuted straight into the Kildare squad, he could give Cian O’Neill a number of different options through the forward line and potentially release other players into the middle third. In the absence of a GAA transfer market, it would be the closest thing to O’Neill adding a multi million Euro signing to his squad.

Brophy has already had some outstanding moments in the white of Kildare. A member of the 2013 Leinster U21 winning side, he scored a goal against Longford in the final that year. He made the first of 20 senior appearances for Kildare in the first game of the 2013 League against Donegal when replacing Seanie Johnston in the 56th minute at Croke Park. He scored his first senior goal in the next game against Cork,

Later that summer he scored 1-1 as Kildare were heavily beaten by Dublin in a Leinster semi-final as the McGeeney era came to close. 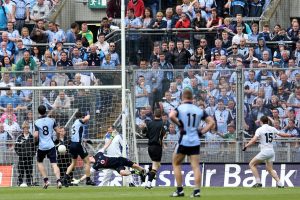 Brophy scored a goal against Dublin in the 2013 Leinster Semi-final defeat
Photo:©INPHO/James Crombie

Brophy played the following year under Jason Ryan and memorably kicked a brilliant last gasp winning point in the League against Mayo but his Championship was disrupted by a back injury. Axs it stands, his last Kildare appearance was the fourth round qualifier defeat to Monaghan in 2014. In total, he scored 3-25 in his 20 League and Championship appearances to date.

His return to GAA action would also give his club Celbridge a massive lift. The Hazelhatch Road outfit have been closer than most to breaking the dominance of Newbridge duo Sarsfields and Moorefield in recent years and Brophy could be the final piece in the jigsaw as they bid for their first Senior title since 2008.

All of this remains conjecture at the moment for it is not yet confirmed when exactly Brophy will return to Ireland, much less when he will take his first steps back on a GAA pitch but thoughts of his return is a very exciting prospect indeed.