FOR the fourth year in a row, Sarsfields will play Maynooth in the Senior Championship when the teams meet in St Conleths Park on Saturday evening but even though the champions have won the previous three meetings, their captain Dan Nea is expecting a very tough battle against a team managed by one of their own clubmen. 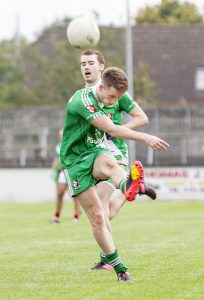 Dan Nea, who will captain Sarsfields this year, fires over a point during last year’s quarter-final win over Athy
Photo : Piotr Kwasnik

“They  have been extremely difficult to get over in the last few years,” said Nea.

“We always seem to meet them in the Championship. Paul Doyle is  their manager and he is a Sarsfields clubman, he would have trained a lot of us and his son is on our team so he knows us very well. He is passionate Sarsfields man but nobody will be thinking he will be going easy on us, he wants to beat us more than any other team I’d say. Maynooth will be rearing to go and are an up and coming team waiting for their chance,” he added.

It will be the first game in a season that Sarsfields hope will end with a third successive championship but even though Nea and his team mates are well aware that they have the chance to become the first side since their own club did the three in a row back in the 1950s, it’s not something that they will allow consume them.

“It’s something we are very conscious of, especially me as captain, there is a great opportunity there in terms of winning our third county title in a row.  It’s very important that we recognise that for what it is and that’s a goal for the end of the year but we have to take it one step at a time. We have right no even get to a quarter-final, or even past the first round, so we can’t look that far ahead. We just want to improve on areas where we were weak last year and build on our strengths, and to take it not even one game at a time but one training session at time.

“We haven’t really spoke about it and even when we beat Moorefield a couple of years ago when they were going for a three in a row, it wasn’t something we spoke much about either. Those type of things are great to look back at the end of your career but you can’t get caught up thinking too far ahead,” said Nea.

Once again, Sarsfields will be managed this year by John Crofton and even now in his sixth year in charge, Nea says that there is still a fresh feeling around the club.

“Any one of us can probably give you his speech, we’ve heard it that often but it’s about his timing. He knows when we need a lift and when the calm approach is necessary. He knows every player inside out by now. It has been mixed up though, particularly with Anthony Rainbow coming in. After having three great years with John Doran, Anthony was great to come in and freshen things up and brought in a lot. He’s constantly trying to change things at training, even down to little things like where we do our gym work, just to mix it up and make it different. After six years you might think it’s the same thing every time you go training but it really isn’t and that’s one of the reasons we’ve been so successful in the six years since John took over.

“John has taken his flak from around the county and even within our own club when results haven’t been going our way but he’s never let it faze him and certainly never let it get to us, he’s always very protective. People want to play for him but it is difficult at times, there has been very good minor teams and he has players coming into the squad who have been used to starting all their life and has to pick 15 out of 30 or so very good players and to keep the others happy but he manages to do it. He gets everybody involved so that when we do have an injury somebody else is ready to step in and have a go,” said Nea.

Last year the side retained their title in some style and Nea feels that of the three titles he has won so far, it was the most impressive.

“It was a fantastic way to end the year considering how much effort we had put in and the setbacks we had received through injuries. A lot of people came up to me afterwards and asked how that one felt compared to the other title wins. The first one in 2012, will always be always special because it was my first. The second one, we went on a run of games where we beat all the top teams in a row but I think last year’s probably ranked as the highest given that it was a real squad effort. We had guys who picked up unfortunate injuries at unfortunate times but we had other guys ready to come in and it really showed how much of an asset it is to have that vast squad at your disposal,” said Nea.

But their success hasn’t diminished their desire to win more titles.

“Everybody on the team knows how great the feeling is (when you win the title) and how all the hard work is worth it. We have numerous guys who have been involved on the pitch and off it in those crucial moments and we’ve now gathered a huge squad who have all shared that feeling so there is definitely no danger of anybody losing that hunger,” he said. 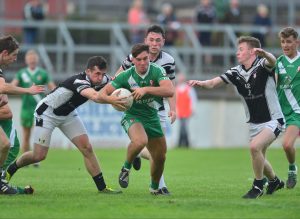 Saturday will be the fourth year in a row that Sarsfields and Maynooth have met in the Senior Championship
Photo: Adrian Melia

Maynooth for their part will go into the game on the back of some fine league form in Division 2 with four wins from five games, a draw against St. Kevin’s their only blemish and they are further bolstered by the return of Kildare corner-forward, Neil Flynn.

After recovering from an appendix operation, Flynn has increasingly taken more and more part in Maynooth’s last three league wins, and along with Conor Canning’s return from Dubai and an ankle injury, is added further to by the return of Jonathon Flattery, who lined out for the first time against Straffan last weekend having recovered from a groin injury.

Captained by Sean Higgins, Maynooth have been without Paul Mescal all year as college commitment has kept the stalwart away. Manager, Paul Doyle, may have further concerns ahead of their game as Kildare hurlers, Cian Forde and brother Tadhg, are expected to play two games in the one day as Kildare play Carlow in the Christy Ring Championship in St Conleth’s earlier in the afternoon.